One US player who will not win the World Cup 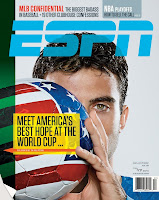 It's Jersey-born, Italian-American Giuseppe Rossi. The US media (ESPN) had written a piece about America's "Best hope at the World Cup." Little did they know that head coach Lippi would drop the American from the final 23 players. The ESPN piece was written weeks ago and Rossi had been included in the preliminary 28-man squad.

Rossi (23, plays for Villareal) is a name familiar with die-hard US soccer fans, especially after last summer's 3-1 pounding by Italy at the Confederations Cup. There was much outrage at his flagrant celebration after scoring two goals on his home country. He had decided to turn down being in Bruce Arena's preliminary squad for World Cup 2006. We must admit that he would probably start alongside Altidore for the US. Rossi instead decided to play for Italy and did so at every youth level before graduating to the senior team. There, he scored three goals last year.

Perhaps Lippi thought that Rossi hadn't contributed much to Italy lately. Perhaps Fabio Quagliarella was a better option in Lippi's scheme. As much as US fans can gloat about "karma," we have to admit that it would have been nice to have an American win the Cup, even if playing for another country. It's also sad for him given the recent death of his father. In any case, there is still another player with an outside chance at going deep into the tournament: Neven Subotic. Subotic opted to play for Serbia even though the US approached him repeatedly. Before your anger grows towards "defectors," remember that Jose Francisco Torres chose USA over Mexico. He showed glimpses of growth as a player against Turkey and is in strong contention to start next to Michael Bradley in the midfield.
Posted by R. Mera Velásquez at 6:36 PM

Yeah, we could kind of use an experienced forward right about now.