The starters: US vs Turkey The US came from behind to defeat Turkey by 2-1 in front of 55,000 at Philadelphia's Lincoln Financial Field. This was supposed to be a match for the starters. Kljestan, Bedoya, Ching, Rogers, Pearce and Johnson had all been dropped since Wednesday. It was time to see who would start in the back. Would it be Bornstein on the left and Onyewu returning to the central position? What about the midfield? Clark or Edu? Torres or Feilahber? And who do we pair with Altidore?

A surprising formation from Bob Bradley with a 4-5-1 with Altidore alone up top and a withdrawn Dempsey right behind him. Feilhaber and Donovan also roaming from mid to forward. Clark and Michael Bradley cleaning up the middle. Bocanegra at left back (expect to see him there in two weeks), Goodson and DeMerrit in the middle and Spector at right back. It didn't work. Howard was furious with his defenders, including Spector, whose incursion forward generated a Turkish counter that opened the score in their favor.

Yes, Spector's place should have been covered by Clark. But the team looked shaky for most of the first half and, if it wasn't for Howard, could have been down by a lot more. Enter Findley fro Feilaber, Torres for Clark, Onyewu for Goodson and Cherundolo for Spector. New team. New attitude. Dempsey retreats to a diamond formation center midfield/forward, Findley roams around as a second striker, Torres defends and attacks alongside Bradley and the back line is solidified. What follows is ball possession for the Americans and scores by two of its prominent strikers: Dempsey and Altidore. Dempsey got to play like he sometimes does with Fulham. Donovan drifted forward also, providing assists on both tallies. Torres feeds Donovan, Dempsey and Findley. 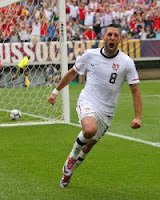 Findley's inclusion in this team was quite a surprise for US followers, including myself. Yesterday he showed us why Bradley picked him. He adds spark and speed late in the game when it's needed. He isn't worried about scoring as a starting forward. He and Gomez make excellent supersubs. Holden is another great option on the left flank, as is Beasley. You have to wonder what will happen with the forward position. Out of this came we have two probable changes: Edu for Clark and Torres/Beasley/Holden for Feilhaber. Expect Cherundolo to take over the right back position. Onyewu may take over for Goodson. Buddle may get the nod up top with Jozy.

Australia is a worthy opponent and the next game is in South Africa, on neutral ground, and a week before the US debuts against England. A last chance to see our probable starters for the World Cup.

Would love to see Torres get that spot, his passing was crisp and penetrating and his defense in midfield tenacious despite his small stature. Fin is indeed very quick but he dribbles way too much - still probably too immature to make much impact in the World Cup, would like to see what Buddle and Gomez have against Australia. I completely agree with your proposed defensive alignment.