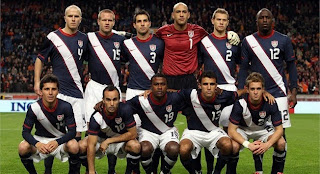 A few thoughts. Most of the players on the roster we knew were going to be there... the Donovans, Altidores, Dempseys and Howards. Beasley's inclusion is no surprise given his recent form with the national team, if not necessarily with his club. It's also good to have Goodson, especially given DeMerrit and Onyewu's recent injuries. He showed great poise versus Czech yesterday.

It came down to fringe players, forwards and the crowded midfield. I'm surprised by the inclusion of Findley, but Bob's comments lead me to believe that he has a plan for the Real Salt Lake attacker. His inclusion also meant Bedoya was out as a surplus midfielder. This is more evident by the resurgence of Beasley and the rise of Holden.

Another surprise, so to speak, is Buddle. He showed yesterday that he can play at the highest level and he has been accurate and constant for the galaxy (9 goals in 9 games). This came at the cost of losing Brian Ching, the veteran of 2006 and an important figure in the offense. Ching was about possession, drawing fouls and opportunism. All important qualities that Bob feels Buddle can bring.

Herculez Gomez's presence is less of a surprise and more of a relief. The top scorer in the Mexican League with a mid-table team and as a substitute is not someone we can afford to overlook. He showed why this is so with his tying goal against Czech.

It was a tough pill to swallow for some of the players, like Ching, Bedoya, Kljestan, Rogers, and even Charlie Davies. Also a great sense of renewal with Buddle, Gomez, Findley. This turnover also includes Altidore, Howard, Spector, Holden, Edu, Bradley, Clark, Torres, Guzan, DeMerrit. Add to that World Cup veterans Donovan, Dempsey, Hahnemann, Onyewu, Bocanegra and Goodson and you have the best the USA has to offer at the moment. Lots of fresh faces, intrigue, experience and drive. Good luck and enjoy the games, for they only come around every 4 years.
Posted by R. Mera Velásquez at 8:04 PM

We better hope the forwards are good if our defense is going to resemble the sieve it was last night.

I can't see Bornstein starting. Even Cherundolo may sit out. Goodson might beat Onyewu for his spot of Onyewu fails to impress in the next couple of games. It will probably be Spector-Goodson-DeMerrit-Bocanegra.