Australia is an odd bird in the football community. They boast talented players, an interesting league set against other major sports (much like the MLS), and a unique location. Perennial representatives of the Oceania Football Confederation, they were always playing playoff matches to enter the tournament. Sometimes with Asia, sometimes with South America, one time even with Israel. Almost never enough to get through except for 1970. Germany 2006 was the first time in 36 years.

Australia was just recently (2005) admitted to the Asian Football Conference (AFC), thus ending decades of relegation to playoffs. They certainly benefited from this and qualified for South Africa without losing a single match to AFC opponents.

In truth, aside from my wanting the Aussies to be in a World Cup to make it truly global, 2006 was my only experience and only memory of the team. They were pitted against Croatia, Japan and eternal-favorites Brazil. Guus Hiddink coached the squad in the World Cup and, true to his nature, took the team to the next level--the second round. 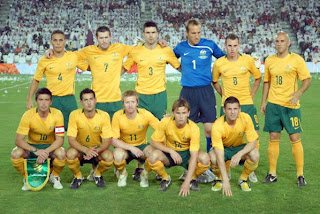 Granted, my memories of 2006 are limited to the fact that I was traveling much of the time (even though I still watched 80% of the games). Still, their win over Japan and a well-deserved tie versus Croatia were enough to see them through to the round of 16. A loss by 2-0 to Brazil was not unexpected.

Australia probably deserved better fate against Italy in the second round. They held the eventual-champions 0-0 until injury time. A fateful penalty taken by none-other than Francesco Totti ended the Socceroos run in 2006. 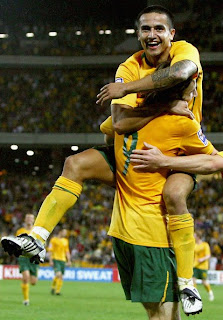 What's next for Australia? A group of death, of sorts. First there's Germany and, considering their squad, almost assured a place in the next round. Then there's Serbia, always dangerous and with a storied past. Lastly, there's Ghana, one of the more dangerous of the African sides in this tournament. Australia has quite a squad, though, and should go head to head with all the teams in this group. Some stars include: Mark Shwarzer (Fulham), Lucas Neil (Galatasaray), Wilkshire (Dynamo Moscow), Lowry (Aston Villa), Mark Bresciano (Palermo), Mark Grella (Blackburn Rovers), Tim Cahill (Everton) and Harry Kewell (Galatasaray).
Posted by R. Mera Velásquez at 3:13 PM

I remember watching that game, the Italians cheated their asses off to win of course.