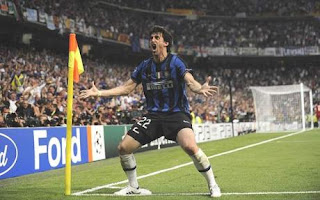 It's Milan. Milito. Mourinho. It's Serie A. Coppa Italia. UEFA Champions League. It's twice the treble and a second year in a row after Barcelona's last year. Inter Milan was the better side today and was victorious over Bayern Munich by the score of 2-0. They were the best in Europe, eliminating Chelsea and Barcelona. Mourinho is still the Special One and always will be. Will he stay put in Milano or will he go to Madrid?

Milito was the man today. Undoubtedly playing the best soccer of his career and, hopefully, also in the World Cup. Sneijder was a menace in midfield and Eto'o was so close so many times. Lucio, Cambiasso, Zanetti and Chivo held their own in the back. Julio Cesar was impeccable and probably saved the game on at least three occasions. Maicon and Pandev were steady.

Let's not forget Bayern Munich. They were a worthy side and Muller could have tied it early in the second half. That would have surely changed the game. There was also a Chivu handball in the area during the start of the game. Could this have changed the outcome of the match? Luis van Gaal's side is young and a force to be reckoned with from here on out. Ribery will return next season. How could he have affected this game?

In the end it was an awesome match. A special game for a special team. A special striker scoring for a special coach. A special coverage by Fox, on national television, in English, for the first time for a European soccer match of this magnitude. America is waking up to soccer. Let's see what happens next month.