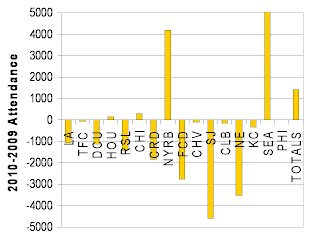 Apologies for the long delay. This sort of delay may go through most of the season this season due to other commitments. Do expect analysis on at least a bi-weekly level. In this post we review weeks 7-10. Much has happened since the last MLS attendance post for week 6. Philly has played again in front of a sizable crowd at Lincoln Financial Field (28,000 aproximately). Seattle keeps on selling out 35K+, albeit still beaten at home to teams like LA and San Jose. Dallas is drawing slightly larger crowds and barely outside the 4-digit realm. New England is also weak. Above we present a high-res view at changes in average attendance from 2009 to 2010. New York is a big winner, even if they haven't sold out their brand-new Red Bull Arena. Expect this place to be rocking once Thierry Henry comes to town after the World Cup.
Posted by R. Mera Velásquez at 7:25 PM