Germany is another classic team. Winner of 3 World Cups in Switzerland 1954, Germany 1974, and Italia 1990, as well as champions in the Euros in 1972, 1980 and 1996. Of course, when we speak of Germany we also remind ourselves that there were once two--East and West. And yes, as with everything else, they both had teams. However, did you know there was a third? That's right, Saarland, briefly a separate state after World War II, and, also briefly, a national team.

There are many famous names that go along with the Germans: Gerd Muller (top scorer in '74), the Kaiser Franz Beckenbaue, Bayern Munich CEO Rummeniegge, the iconic Lothar Matthaus, Juergen Klinsmann, Thomas Hassler, Andreas Brehme, the list goes on. Even Berti Vogts makes the list for me... Why? It just so happens that I went to a German school during my elementary school and part of Middle school. I thus had a soft spot for the team and cheered for them against Argentina (and pretty much everyone else in my family) in 1986 and 1990.

So this is where my memories begin... Mexico '86. Really I mostly remember the final, although images of the Mexico-Germany game remain as flashes. I also knew they had defeated another personal favorite, France, in the semifinals. But it's the final that really sealed the deal. This was Maradona's Argentina and Maradona's tournament. He would prove it not by scoring the goals, but by orchestrating play and drawing defenders to leave team mates such as Valdano and Burruchaga, open. The game started with a 1-0 in favor of the south Americans after Brown scored in the 23rd. Valdano increased the lead in the 55th but Germany roared back with tallies by Rummeniegge and Voller. The latter occurred in the 80th. Burruchaga would score in the 83rd in an amazing breakaway that still aches in Germans' minds.

But Germany would have revenge. If Argentina could be considered the "Rocky" of '86, then Germany would undoubtedly be the "Ivan Drago" of 1990. Not evil, no. Just a steady, powerful machine that got their result game after game. It would start with a thrashing of then-unified Yugoslavia (4-1). Klinsmann, Matthaus and Voller all scored. They followed with a resounding 5-1 victory over lowly United Arab Emirates. Having mathematically secured their place in the round of 16, their game against Colombia didn't matter as much. This was welcomed by the "cafeteros" and the resulting score was 1-1. An epic game unfolded in the next phase against a worthy opponent--Holland. The Germans would prevail (2-1).

In the quarterfinals, it would be Czechoslovakia's turn. Lothar Matthaus delivered a penalty early in the first half and the score would stand. In the semifinals, another battle took place. It was England (with Gary Lineker). This had to be one of my favorite games. Brehme would score half-way through the second half, much to my amusement. Lineker would show his magic again in the 80th minute, tying the score and sending it into added time. Without a score in a gritty, dirty half hour of extra time, the game ultimately came down to penalties. Yes. Oh, the agony! Brehme, Matthaus and Riedle would score... so would Lineker, Beardsley and Platt. Pearce and waddle would miss. Oliver Thon sent Germany to its third consecutive World Cup final. 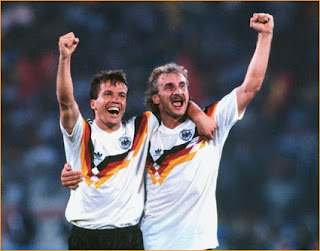 The final of 1990 was another special occasion. It was a repeat of 1986, but this time in Europe. There is a rule, only broken by Pele, that when a tournament is played in Europe, the winners are the Europeans. South Americans rule in the Americas (and Asia, where Brazil won). Unlike in Mexico, Maradona wasn't as dominant a player in 1990 and was actually playing while injured in the final. The match was back-and-forth with emotions running high. So high, in fact, that a questionable penalty was awarded to Germany. This time, however, it wasn't Lothar Matthaus who stepped up to the spot. Instead, it was the steady Andreas Brehme. He shot the ball low and to the left (right of Goycochea, see video below) and cemented Germany's title as the third team to win at least 3 World Cups. Matthaus kissed and lifted the trophy. Maradona wept in agony.

For USA '94, Germany was an established team that kept its old guard (Klinsmann, Voller, Hassler, Matthaus all present) in hopes of winning once more. They had a somewhat "easy" group with Spain providing the most competition and Bolivia and Korea regarded as relative minnows. However, they found that their game had been decoded by their foes. They squeaked by Bolivia 1-0 thanks to Klinsmann. They had to come back for a tie against Spain (1-1) and, after going up 3-0 versus Korea, the Asians came back to finish the score 3-2. Germany's next opponent was Belgium, and Voller dismantled the side early in the game, but as with previous matches, the Belgians found a way to sneak back to make it 3-2 after being down 3-1. It seemed like everyone had a way to claw back at the Germans, and Bulgaria made it clear that this time Germany lacked the confidence to go the distance. After being up 1-0 thanks to a Matthaus penalty, Letchkov and Stoichkov flipped the score in their favor in a matter of three minutes. Matthaus looked shocked as he looked at the final score in disbelief.

By 1998, my tastes, knowledge and appreciation of the game had changed significantly. Germany wasn't my default team to cheer for, especially considering that France was hosting and playing attractive football. Added to that was the beginning of a long trajectory of following the US national team. Germany had it relatively "easy" in the first round, pitted against USA, Yugoslavia and Iran. Moller and an aging Klinsmann beat US 2-0, followed by a tie (2-2) versus Mijatovic's Yugoslavia, and another easy 2-0 win over Iran courtsey of Bierhoff and Klinsmann. Germany then met Mexico in a reprisal of the 1986 quarterfinal game. Even though "el Matador" Hernandez scored first for the Aztecs, it would not be enough and Germany clawed back to a 2-1 finish. Then, disaster. Against a "weaker" team. This time, it was Davor Suker's Croatia. 3-0 was the final score and the Bavarians went home early.

If Beckenbauer was the coach that won the most praise in the 80s (culminating with the 1990 trophy), and Berti Vogts ruled the 90s, then the 21st century was the realm of Oliver Kahn and Michael Ballack. In 2002, the two would take Germany all the way to the final. It started with a bang... a 8-0 pummelling of Saudi Arabia. This was followed by a 1-1 tie against Ireland and a 2-0 win over Cameroon (Klose scored). The round of 16 pitted them against Chilavert's Paraguay. They won the game only after scoring in the 88th. Next came a game American fans won't soon forget. After a memorable win versus Mexico, the US had high expectations (having also defeated heavily-favored Portugal). It was not to be. Ballack's score in the first half sealed the deal for the Germans. Ballack again proved he was a game-changer when he scored in the semifinal versus home-team Korea. 1-0 was the score and the Koreans had to settle for the 3rd place consolation match. The semifinal game was also important in that Ballack was booked and would miss the final against Brazil. This was the first time these two teams met in a World Cup. Brazil had breezed through the competition with 6 tallies by Ronaldo whilst Germany had stumbled in with gritty play and Kahn's goalie heroics (he would receive the best player award). The match always had a favorite also because of Ballack's absence. The German's attack was muted at best and Ronaldo showed his class and gained the title of top scorer (8 goals, most since 1974's Lato). Brazil won its fifth title by the score of 2-0. 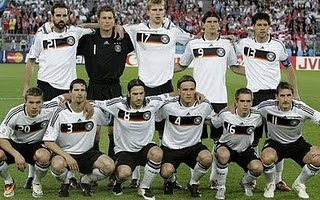 Germany would once again host the ecumenical tournament in 2006. Lucky for me, I was in Europe for most of the tournament and I got to enjoy it in the company of Europeans in pubs, restaurants and hotels from London to Venice. This German team, coached by the charismatic Juergen Klinsmann, was widely regarded as relatively weak. They opened against Costa Rica (first time defending champions were not automatically qualified and did not play inaugural match). It was a 4-2 score. In their second meeting, a much more worthy foe, Poland, awaited. The match was scoreless until late in the second half. A win by Germany would automatically qualify them, along with Ecuador, to the next round. In their last group match they played an Ecuadorian team that rested most of its starters ahead of their round of 16 game versus England. Germany faced Sweden in the second rounds, where two early goals from Podolski were enough to see them through. In the quarterfinals they met Argentina in a reprisal of the '86 and '90 finals. The match was tied 1-1 and Germany won on penalties. The semifinal against Italy was probably the best game of the tournament. It went 0-0 and just as we thought penalties would end up deciding the match, Grosso would score in the 119th minute, shaking his head in elation and giving us postcard moments and highlights for ESPN ads. Del Piero would seal the score two minutes later. No need for penalties. Germany won their consolation 3rd place match against Portugal. 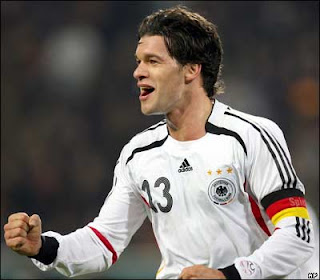 What's next for Germany? Australia, Serbia and Ghana. Look for Serbia to be the toughest opponents. Ghana and Australia are no pushovers (we're talking about Michael Essien, Tim Cahill, etc). There may be one or two surprise scores in this group but Germany should go through. Still on the radar are Pdolski (Koln), Ballack (Chelsea), Klose (B. Munich), Schweinsteiger (B. Munich), Lahm (B. Munich). Note that the majority of players are from the domestic league... this gives them more familiarity and continuity.

You forgot to mention that the cheating Nazi bastards cleared one of the line with their hands during that USA match. Not that I am bitter. The ref was also a fascist.

By 2002 my allegiances were solely with the States & Ecuador

Mark Ballack off that radar.