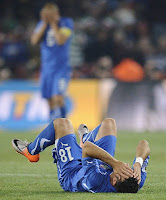 There are critics out there that prefer Italy out of the tournament because of their overly defensive tactics. France was also downright sad to watch. Where was Ribery, Malouda, Henry, Toulalan? They were there in body but not in spirit. Perhaps the Raymond Dommenech situation or the recent underage prstitution scandal involving Benzema, Govou and Ribery overshadowed any semblance of a chance the Gauls may have had in South Africa. And Italy? Let's just say they were never young enough to get too far, not when a third of their players are over 30 and their star player (Cannavaro) is 36. Maybe they should have called Maldini? 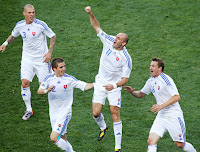 Conmebol certainly has impressed. Barring a possible change in fortunes tomorrow with Chile, all South American representatives are already through. Concacaf also has its two major powers, USA and Mexico, through to the next round and in style. Mexico defeated 2006 finalist France and USA went unbeaten in group play and won their group thanks to goals scored. Let's not forget Asia. Their more storied sides, South Korea and Japan, also went through to the next round after overcoming opposition from mid-level European teams (Greece and Denmark, respectively) as well as African teams (Nigeria and Cameroon, respectively). Japan did it in style today in a dominating 3-1 decision over Denmark. They managed to score two goals from direct free kicks (what's wrong with Jabulani?). Oh, don't forget Australia (4 points, lost passage to next round to Ghana by goal differential) and New Zealand (unbeaten, three ties). 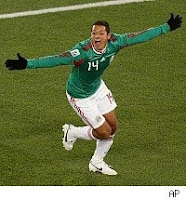 So what else is happening in this World Cup? One special thing location. Aside from Africa's failure, the different conferences have enjoyed the neutral location. Indeed, Americans are reported to have bought more tickets than any other country except for South Africa. They may not all be supporting team USA, but the various groups living in this country probably took up a large portion of the tickets.

One other aspect corroborating in this revolution is this: teams like Italy, England, and even Germany have leagues in which the majority of players in the dominant teams are not domestic. Inter, for example had only one Italian-born player on the pitch at the Champions League semifinal. Add to that the fact that the back line is made up of mostly Juventus players. Juve didn't have the best of seasons either. Oh, and England... why is Heskey starting? He hardly saw time on the field this past season. Germany's squad also relies heavily on Bayern Munich. You could argue that these players are tired from a very long season that included the Champions League final. 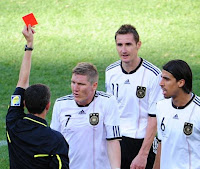