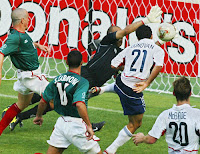 The World Cup belongs to UEFA and CONMEBOL...always. Not once has a team from Asia, Africa or North and Central America won the cup. Further, no African or Concacaf team has made it to a final. Only South Korea has made it to the semifinal in the modern era, and their participation at that stage may be due to favorable officiating. Oh, USA did make it to the semifinal, but in 1930. It's safe to say that 99.9% of Americans even knew that soccer existed. Everyone was watching baseball anyway.

So let's revise history a bit. If we look at Mexico, their best results were reaching the quarterfinals in 1970 and 1986. Are those familiar dates? They should be, they were the tournaments hosted by Mexico. And the United States? They have also stopped short at the quarterfinals...in 2002. This after first coming back to the world stage in 1990, with a round of 16 appearance when they hosted the World Cup in 1994.

Can we blame USA and Mexico's exits from the World Cup on battling stronger, legendary foes? Partly. For Mexico, starting with 1986, Germany defeated them on penalties (1-4). They were absent in 1990 due to disciplinary reasons. In 1994 it was eventual-semifinalists Bulgaria that ousted them in the round of 16. Was that a top competition? At the time, no. They lost on penalties, again, after Hristo Stoichkov scored a beautiful tying goal on Jorge Campos. After that it was Germany in 1998, USA in 2002, and Argentina in 2006 and 2010. You can make a case for top competition in 3 out of 4 of those tournaments. The match against the USA was a toss-up, especially since the two teams know each other well. However, in this match they were beaten 2-0 and not in penalties.

What about USA? If we discount the times they failed to make it out of group play (1990, 1998, 2006), they also faced top competition in 2 our of 3 of the corresponding games (Brazil in 1994 and Germany in 2002). Brazil won the cup in 1994 and Germany reached the final in 2002. Yes, that penalty against the USA shouldn't have counted on that fateful quarterfinal against the three-time world champs. And in the current World Cup? We can say that Ghana isn't top competition but they were in Africa and level in strength.

Let's look at South Africa a bit closer. In the words of the great Mauro Velasquez Villacis, neither Mexico or USA beat anybody. What about France? We can all agree that France was in shambles due to internal strife. Mexico couldn't defeat the host nation and fell to Uruguay, which set up a match against Argentina. USA also didn't beat anyone; Algeria isn't really considered a world power. 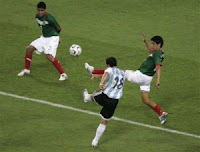 Mexicans and Americans may both make reference to non-World Cup tournaments such as the Confederations Cup or U-17 and U-20 tournaments. Mexico may have won the Confederations Cup in 1999 (they were hosts) and the USA may have reached the final in 2009, but let's face it, these do not compare to the World Cup. And when you throw in Mexico's U-17 championship in 2005 and USA may have reached the semifinals in 1999 I say this: youth tournaments almost never reflect the senior team. As an example, USA defeated Brazil in 2007 by the score of 2-1. The senior team has defeated them once in the last 20 years, and on home soil on a non-World Cup match. 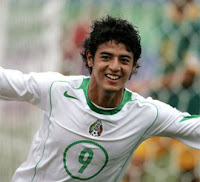 There is still plenty of room for evolution of the Concacaf region. The Mexican Primera is a quality league and MLS is catching up to the world. Players from the region are also beginning to populate European leagues. If Ghana were to reach the semifinal in 2010, it will be a victory for the continent. It may not be long before USA or Mexico reach the semifinals and it may also take a hosting of the tournament by one of the two countries. If USA hosts in 2018 or 2022 things may go their way, especially since Mexico is essentially at home in this country. Until then, however, Concacaf will continue to lag behind.
Posted by R. Mera Velásquez at 3:26 PM