It started like any other US match: USA starts slow, timid and uncreative. Opposing squad scores an early goal by way of Birsa. It wasn't doom and gloom yet and Donovan, Torres, Findley and Altidore attacked. That's when it hit home... a second Slovenian goal courtesy of Ljubijankic. Why? Torres wasn't tracking back to the defensive mid position required when given the chance in substitute of Ricardo Clark. His understanding with Bradley was missing and didn't echo what was gained from the Turkey friendly in Philadelphia. Onyewu also showed signs that he may not be fully fit yet.

But Bradley fought back as he always does. He switched Edu for Torres (I wish Edu had been there from the start versus England also) and inserted Feilhaber for Findley. Yes, we lost a pure forward. Not so fast... Dempsey can slide into that position (same as against Egypt last summer). There, he can provide a creative spark and a moment of brilliance or two. The response was immediate: Donovan slipped past a sliding defender for a run on the right wing and delivered a shocker of a goal from an impossible angle that the goalkeeper shied away from as if spooked by a mouse. 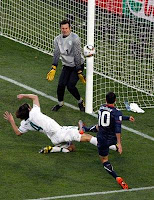 Gritty American soccer followed Donovan's goal. And by gritty, we also mean attacking football. Altidore sparked into life and used his size to win balls and draw fouls. A masterful center from Donovan almost from midfield was headed down cleverly by Altidore and met a one-time strike from Michael Bradley. The score was tied.

America was back and it might just be a win for the Stars and Stripes. Donovan took a perfect free kick that lobbed into the 6 yard box, where Maurice Edu buried it in the back of the net. But the referee disagreed. A phantom call. Was it offsides? Who? Only Edu touched the ball and he was several yards behind the last defender. A foul? Hustle and tussle from both teams as with any free kick into the area... and Edu barely made contact with his marking man. A robbery indeed. America lost two points today and it wasn't because Slovenia was better. It was because of amateur refereeing. When will FIFA allow for goal line refs at least?

It's sad to admit it, but the US always looks better when coming from behind. Just remember important matches like the 2007 Gold Cup final (down 0-1 to Mexico, final score 2-1), World Cup qualifiers against El Salvador (twice and one time from being 0-2 down), Honduras (at home and away from 0-1) and Costa Rica (0-2). Oh, a little game against England last Saturday. Why can't we have more of the 2-0 versus Spain (Confederations Cup) or 3-1 versus Australia (friendly). It is a continuous disappointment, followed by exhilaration and then a continuous heart attack as we pray the match can end in a favorable draw or an improbable win.

Today we watched most of the game but settled for a half hour of radio coverage. We still screamed in joy as our team scored. Other American fans were celebrating in pubs from Chicago to Seattle and living rooms from Cleveland to Phoenix. And better yet, the majority of fans at the stadium were cheering for the USA. That's the real win today. Welcome, soccer. America is ready for you.

Wednesday's test will be stiff. Algeria tied a top-ranked English team and is still alive for a spot in the round of 16. The USA needs to win, plain and simple. Hopefully Bradley will have learned his lesson and we will take over the field to book a spot in the next round. The team deserves it. The country deserves it.

Great article, just found one mistake - title should be US "ties" Slovenia. So much for the good refereeing of the first few games of the Cup.