End of a dream: USA eliminated by Ghana 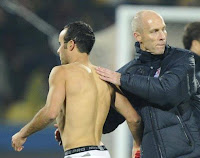 We watched it together. We cheered together. We laughed and cried together. This time there was no happy Hollywood ending, however. But the United States national team did show one thing: courage. They never let themselves down even after being scored on. They always knew there would be a way back. Sometimes, though, heart just isn't enough to win games.

It started with a miss-call by Bradley: Clark would slip back into the central midfield role alongside Michael Bradley. It had worked great in qualifying and in friendlies, but we can argue that Edu had worked better. Edu was a first-teamer with Glasgow Rangers, he had been robbed a goal versus Slovenia and had played a great game against Algeria. Why not keep him in the role? He's as imposing a central mid as Clark is. Questions for the future, no doubt.

Going down early in the game has been the USA's weak spot throughout this tournament and even in qualifiers. Boateng scored in the 5th minute after Ricardo Clark coughed up the ball in the midfield. The first half had few chances for the Americans and they seemed lost. Would there be second half heroics?

There were. The US pushed up the field and maintained possession. A foul on Dempsey in the area made way for Donovan's equalizer. But Bradley's men seemed content. A few half chances, maybe one Altidore should have done better on, and regular time ended. On to extra time. And there it came again. An early lapse in concentration by DeMerrit and Bocanegra and Gyan, Ghana's top scorer, scored a sublime goal. There would be no comeback. There was no gas. Bradley subbed Clark early in the first half (deservedly so) but this meant less choices going forward. The 120th minute came and went and even Howard's intrusion into the opposing goal was negated by the West African side.

Disappointment? Yes. Should the coach continue? That is to be determined, but just because he had a good run doesn't necessarily mean he will continue to. Players need new environments, new encouragement, new ideas and new goals. Bruce Arena was also a great coach but his ideas ran dry when 2006 came around. We don't want to see the same in 2014. We should rebuild this team and aim higher. Landon Donovan (28) still has another World Cup cycle in him. Zidane did it before. Charlie Davies will return and we have up-and-coming players like Bedoya, McInierney, Luis Gil, Sean Franklin, Omar Gonzales, all waiting for their chance. US Soccer needs to seize this opportunity and make a great team even better.

The national team already made fans at home and abroad. Can we keep the energy going? We certainly hope so.