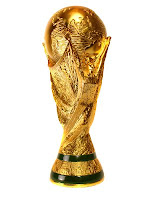 Okay, make that three to Tango if we count Holland. Unless you have decided to watch baseball or the NBA or the Gulf spill, you probably already know that there have been upsets galore in South Africa 2010. Starting from the top: France ties 0-0 Uruguay and falls 0-2 to Mexico, England ties 1-1 versus USA and 0-0 versus Algeria, Italy ties 1-1 versus Paraguay and New Zealand, Germany loses 0-1 to Serbia, Spain loses 0-1 to Switzerland. Discounting non-traditional outliers (Mexico, Paraguay, Slovenia, etc), we are left with only Brazil, Argentina and the Netherlands. If we go, strictly speaking, with history, then Holland is taken out of the equation and we are left again with just Argentina and Brazil.

Perhaps this "disarray" is due to a non-traditional location for the event: Africa. Perhaps the game is much more competitive now and teams from powerhouse leagues like England and Spain don't really match up with international success. Maybe the players are too tired from so many competitions. Wait, nearly all players tend to see each other once or twice if they play in such prestigious leagues (Drogba, Rooney, Dempsey, Vela, etc.). Clearly, this isn't the way to explain it since it would be a worldwide phenomenon of lowered quality in the game. No one wants to slump at the World Cup, right?

Then there is the African nations. With so much power and a "home field advantage," shouldn't they be tearing through teams like Australia, Japan and Slovenia? What's going on with Eto'o, Drogba, Gyan? Nothing. It's just that the teams as a whole just aren't quite there yet. More discipline is needed, perhaps, but haven't we been saying this all along? Aren't we always looking for a breakthrough African team that reaches the semifinal or, why not, the final? Cameroon (1990) and Senegal (2002) left us wanting more. Maybe South Africa can still pull off of a miracle entry to the round of 16 (still possible) and evade the title of first host nation to be eliminated in group play.

So we come back to a natural conclusion, one that is supported by historical evidence. It's as simple as this: a team that is meant to win it all does not lose a game. Never in World Cup history has a winner lost a game during the competition. Ties, yes (Brazil-Sweden in 1994, Italy-USA in 2006, etc.). With that in mind we can also argue for Italy to have a shot still. But, we are left with two teams that have thoroughly defeated their opposition: Brazil and Argentina. Historically, it takes Argentina or France to knock out the Brazilians (this goes back to 1986 for perspective). Argentina, on the other hand, can go out any number of ways: Germany, Romania, England, Netherlands.

This has to be the most competitive World Cup to date. Most teams (excluding Cameroon and perhaps one or two others after tomorrow) still have a chance to advance. Most "contender" teams could be sent packing. This could also be a World Cup of firsts: the host nation eliminated in group phase is a first. Maybe wounded nations such as Spain and Germany can break the curse and lift the trophy. If that is the case, then they have mountains of history to climb as well as two formidable gatekeepers: Argentina and Brazil.
Posted by R. Mera Velásquez at 6:57 PM