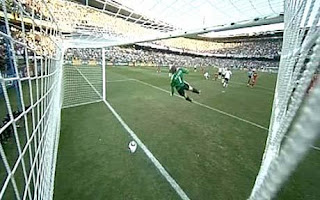 Grow up, please. FIFA, as much as we love you and the tournaments you provide, it can be quite unbearable at times to watch our teams (or even our foes) lose out due to bad officiating. As ESPN commentators put it today, bad officiating can be quite costly for football business. A bad call on a disallowed goal at a major tournament may mean losses in broadcast and merchandising, public interest and less respect for the game. This last part I'd like to throw in since it's the more American viewpoint from passive soccer-watchers. "Soccer needs to change or people won't accept it here." I agree with the first part.

Aside from two non-calls that may have favored the US versus Slovenia and Algeria (no fouls or offsides in the disallowed goals by Edu and Dempsey respectively), there have been major faults in the system. Two major faults, both today, both with quarterfinal repercussions. First, in the England-Germany game, came a blatantly legitimate goal by Frank Lampard that bounced of the horizontal bar and a good yard behind the goal line before bouncing back out. We all saw it except for the officiating crew. England would have tied the score. There is goal-line technology now in other sports (and has also been tried in soccer). How can we not go forward with this at least?

The other event was the goal by Tevez that opened the score in the Argentina-Mexico match. Tevez was offside by several yards. If that wasn't offside then Edu scored from his own half, right?

Okay, so FIFA wants to maintain control and pace of the game. True, yes, but when 99.9% of the press, players, coaches, world ask for change, you have to give in. If replay and/or goal line technology aren't enough, then please please please put another referee behind the goals. At least they would be able to tell us if 1) Tevez was offside, 2) Lampard goal counts, 3) Henry/Maradona uses his hand to score.

So FIFA, hear us out. We want some change to have our sport back. Soccer belongs to the world, not to a board room playing God.