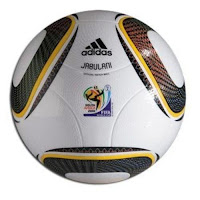 Yes, we all waited four long years for the greatest spectacle on earth, but we're missing the special guest--the goal. Should we blame Jabulani? Defensive-mindedness during the opening game? Anxious speculation? Loss of creative midfielders? We can argue for all these variables but the truth is this tournament has been a tad boring. Six ties out of fourteen games. Two groups are level at 1 point for each team. Really? I thought the enhancements to the game ball were to increase the number of goals, no?

We hear it over and over again. A tie here and a tie there. Teams don't want to lose their first game so they settle for a tie at the 75th minute. This, you can argue for Cote d'Ivoire-Portugal, Italy-Paraguay, Mexico-South Africa, shall we go on?

Also, all 23 goals have been scored by 23 different players. Who's going to be this tournament's pichichi? So far, only Germany has shown enough tenacity to obliterate an opposing squad. Not even Brazil could muster a 3+ game. Weren't North Korea and New Zealand supposed to be the punching bags of the tournament? Perhaps Spain (favorites and prolific scorers) and Chile (also a high-scoring squad) can score more than 3 goals. Perhaps someone will get a brace? A hat trick?

Also, enough about the vuvuzelas and Jabulani. Noise is a part of the sport. You get accustomed to it. And the ball? Goalies mishandle, midfielders can't distribute and strikers lob it over the goal. Yes, there is a pattern. But consider this: Germany has had it for 6 months and have learned to use it quite well (4 goals over Australia). If they win the whole thing, you may make the case for extended "training" with the ball that no one else had and FIFA may want to look into it. Otherwise, it's just a new aspect of the game. No one is ever good at something the first time. We learn from our mistakes and adapt.

I think we are likely to see higher scores in the second round. The fear of the first game is over. Everyone has a chance to cement their place in the next round. This means winning games 99% of the time. Please, fellas, have fun with the ball. Enjoy yourselves and give the world a better spectacle than what has been shown so far.
Posted by R. Mera Velásquez at 10:52 PM

Portugal certainly brought the scoring drought to an end today! I think the lightness of the ball has made it difficult to get it down on high shots, especially direct kicks over walls. For sure the start has not met my high expectations after a thrilling European Championships in 2008.