For such a small country, the Netherlands sure packs a superb punch. Maybe this is why their nickname is the "Clockwork Orange" or "Naranja Mecanica." Twice runners up in the 1970s with losses to Gerd Muller's West Germany in Germany 1974 and to Mario Kempes' Argentina in Argentina 1978. 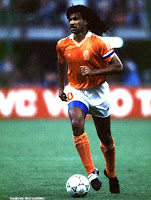 Our story here begins with Italia 1990. Those were the days of Ruud Gullit, Van Basten and Ronald Koeman. Having won the 1988 Euros, Holland was riding high and ready to win its first World Cup. To my untrained eyes, Gullit was the Dutch sensation. "Did you know he scored a goal with his chest?" someone uttered once in a lunch break soccer scrimmage. We watched the team stumble into the round of 16 after tying three games (England, Ireland, Egypt), and without a single goal from maestro van Basten. There, they met eventual-champions West Germany. The game was gritty, dirty Euro-style football. Germany won thanks to Klinsmann and Brehme. Koeman would score a consolation penalty in the 89th. This match also had a bit of controversy with a spitting incident between Rijkaard and Voller.

In USA 1994, The Netherlands was considered a contender once more. They would have to do without Gullit (on strike) and van Basten (injury). Bergkamp would step up and deliver a masterful performance with 3 goals that took them all the way to the quarterfinals. They would first face an interesting group stage: Belgium, Saudi Arabia, Morocco. This was quite an interesting group. Belgium, Holland and Saudi Arabia all got 6 points (2 wins) and same goal differential. The Dutch would defeat both the Saudis and Morrocans but would fall short against Belgium. Bergkamp and Jonk would both score versus Ireland in the second round. Their final match in 1994 came against eventual-champions Brazil. It was probably the best match of the tournament. Twice Brazil scored through Romario and Bebeto, only to be followed by strikes from Bergkamp and Winter. A long-range free kick from Branco sealed he 3-2 scoreline in favor of the Amazonians.

France 1998 came around and Holland was again a contender. Now they had players like the De Boer brothers, Cocu and Overmars. They faced Belgium in the opening match (0-0 draw). Their second game was a scintillating performance against a limited South Korean team (5-0). Feisty Mexico put up a fight and "El Matador" Hernandez tied the game 2-2 in extra time. A match against Yugoslavia awaited them in the round of 16. It would take an injury time goal from Edgar Davids to defeat the Balkan squad. What followed was perhaps one of the best matches of '98: Netherlands - Argentina. Kluivert opened the score and the Argentineans would tie the game thanks to "El Piojo" Lopez. An ill-timed ejection of Ortega, coupled with a wonder goal from Bergkamp, sent the Dutch to the semifinals. A re-match of the '94 quarterfinal versus Brazil would follow. Scores by Ronaldo and Kluivert meant the game would go to penalties. Brazil would win it once again thanks to misses by Cocu and Ronald de Boer. Holland would settle for 4th place after a loss to Davor Suker's Croatia. 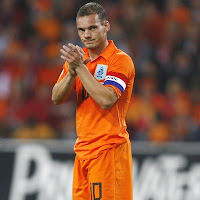 Much to the surprise of the entire footballing world, Netherlands failed to qualify for 2002. The Dutch were placed in the group of death in Germany '06: Argentina, Cote D'Ivoire and Serbia & Montenegro were the opponents. They defeated Serbia in the first game. The second game, against fellow orange-wearing Ivory Coast was a memorable experience for me. I happened to be in Amsterdam for the match and saw a sea of orange everywhere I walked. That evening, I got me a cheap knock-off van Nistelroy shirt and wore it to a packed restaurant to watch the match. Holland would prevail 2-1. They would subsequently tie Argentina 0-0. The Netherlands were eventually booted off the tournament by Cristiano Ronaldo's Portugal in the round of 16.