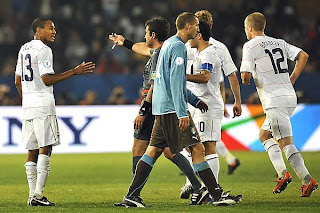 I won't get into too much description of the game. For that you can go here or here. Instead, I want to focus on the central midfield and what went wrong. First, that was not a red card on Clark's challenge during the first half. If anything, a Benny Feilhaber foul in the second half merited it much more. Second, there was at least one foul that deserved a red if Clark's was deemed so offensive.. An elbow to Donovan's face that only got a yellow.

Donovan comes up big again and delivers a scintillating penalty. But the upset was not to be. An inspired supersub (and US born) Giusseppe Rossi ties it up from a distance with a splendid shot that outmatches Howard. This started with a careless play by Feilhaber. The second goal by de Rossi was also a long shot. What do these two goals have in common? They were generated by poor passing in the middle of the pitch. That's where Ricardo Clark (red card) would have been. That's where Mastroeni and Christ Armas used to shine and Edu would work wonders. I'm not saying Italy couldn't have won anyway but we have to take into account that the US defense, despite a few misskicks, was pretty stout except for these long-range shots.

Yes, let's remember that Italy are the world champs and that they have the luxury of having players like Luca Toni and Rossi on the bench. And the road does not become any easier. Up next is mighty Brazil. The "caraninha" fought hard for a 4-3 win against Egypt in a game that the "pharaohs" played extremely well and perhaps deserved better. So what happens with Clark's omission on Thursday? This will be a very difficult decision for Bob Bradley. He needs someone to partner up with Michael Bradley in the middle of the pitch to break up plays from the opposing team. Torres, Kljestan and even Beasley are options here. I would slide Beasley into the middle in favor of Kljestan or Torres due to his experience. Feilhaber is an option too but his skills are more creative and offensive. The same goes for Kljestan. Finally, there's the Torres option. The Pachuca man has shown effective ball-possessing technique. This is key when facing a squad like Brazil.

Aside from the devastating hole in the midfield due to a huge misscall by the ref, I thought team USA played courageously and with a certain amount of attitude.

Same thing happened in the World Cup - Italy plays a dirty brand of soccer, but the refs are scared to call anything as they are blinded by the jerseys and don't seem to be able to watch the truly disgusting, unsportsmanlike play often exhibited by the Azurri. On the other hand, any physical contact by an American player on an Italian player seems to result in a red card.