So close and yet so far: US vs Brazil

Early goals are so important. The US has had this problem for most of the games they have lost this year: Costa Rica, twice to Brazil. The turning point in a game that was close to being one of the biggest upsets of all time was Luis Fabiano's goal less than a minute into the second half. You give Brazil another 44 minutes and you are asking for it. A little overconfidence? Maybe. It's a hard lesson to learn but remember this.... 3-0 versus Egypt and 2-0 versus number 1 Spain. Losing 2-3 to Brazil in the final isn't so bad. They played with spirit, courage, grit, and goals. Two of them. This is a star-studded Brazilian side that boasts Luis Fabiano, Kaka, Robinho, Dani Alves, Luizao, Elano, Julio Cesar.

In fact, the US should probably have lost by more. A 5-2 would not have been surprising. A 4-2 would have been true if that goal counted that Howard miraculously saved. The ball went in. Replay shows it did. No doubts there.

So what do we take away from this experience? Close down in the early minutes of a game or a second half. Be smart in defense and don't give up unnecessary fouls that can lead to dangerous set pieces. No red cards, please. Bradley's absence today could have made a difference with some of the passes Kljestan and Clark wasted. His eye for goal may have changed things too. Sticking Torres and/or Adu could have brought something else to the game. At that point why not try your aces? 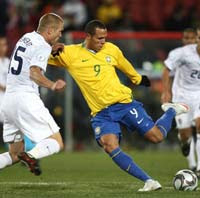 Still, a historic tournament. Now we regroup, re-energize with a deeper pool of players: Ching, Edu, Jermaine Jones, Cherundolo, Hejduk. I'd like to see Edu-Bradely in the midfield. There's still plenty of time before South Africa 2010. We must still qualify. Now we have the experience to do well into the tournament, getting those wins necessary to advance and playing smart to dismantle a top team's offense. Fabiano's goal early in the second half undermined the US's style of play. It opened up the game for Brazil since the US had to look for an insurance goal. Hunkering down and hoping/praying to stay up on the scoreboard isn't quite enough. Possession in the midfield, Michael Bradley's strength, is what was missing in the second half.

But we played great anyway.

Anonymous is right, nice job, you should replace Lalas on ESPN, he is pretty useless since he cut his hair.

Lalas peaked in 94, then forgot his soccer and tried managing... The LA Beckhams?
94 had some good memories, though.