Get your DVRs/Tivos ready. It's the best of the best (sort of) international teams on the planet facing off in South Africa for the FIFA confederations cup. This competition pits all the winners from all the confederations against one another plus the world champs and the host country. All complete squads. All new stadiums. Games will show on ESPN2, Galavision.... and the US is participating.

Group 1
Italia: Pirlo, Rossi (American-born), Cannavaro, Gilardino, Zambrotta, Iquinta are some of the highlights from the Italian squad. Lippi is once more the coach after Donadoni crashed out of the Euros last year. Expect gritty, defensive-minded soccer from the world champs. A rematch of World Cup 1970 and 1994 finals against Brazil in group play (next Sunday) should be fun to watch.

Brazil: Kaka, Robinho, Pato, Julio Cesar, Luis Fabiano are all in the mix. Ronaldinho is out for this one. The selecao is looking for more silverware after a disappointing Olympics last summer. This squad only seldom fails to entertain.

USA: The biggest test for the US before the World Cup (assuming they make it). What better than putting them with Italy and Brazil? Getting out of this group would be amazing. They fought for the spot in this competition against Mexico in Concacaf's only meaningful Gold Cup two years ago (for some reason they have an inconsequential one this summer too). Expect Spector and Bornstein to raise their stock and many other players looking to showcase their talents in the world's biggest stage yet. Jozy, Casey, Adu, Kljestan, Bradley are all looking to continue impressing.

Egypt: I wish I were more familiar with this squad. All I know is that they are struggling at the moment in world cup qualifying in a group that includes Algeria and Zambia, both of which have not advanced to the tournament for the past two decades or ever. Egypt last played in a world cup in 1990 but has repeatedly won the African Cup of Nations against more accomplished world class teams like Nigeria, Cameroon and Ghana. 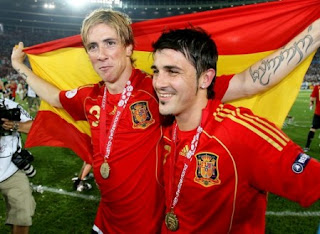 Group 2
Spain: This is an extremely talented squad, winners of last year's Euro. It includes amazing players like Torres, Iniesta, Xavi, Xabi Alonso, Puyol, David Villa, etc. Whilst their back four may not be as strong as other teams like Italy and Brazil, their midfield can break up any team's attack. Spain is also undefeated since before the Euro competition. I pick them as winners.

New Zealand: After Australia joined the Asian Football Confederation (AFC), New Zealand was left in sole possession of Oceania. I can't see Fiji or the Solomon Islands beating them out. The "kiwis" will have a play-in game against the 5th AFC team for the world cup. Don't expect too much from then at the CC.

Iraq: AFC champs and representatives. Bandwagon team for many. They had a nice run at the Olympics in Athens but should not pose any trouble to Spain or South Africa.

Sout Africa: I'm picking this team to go through from the group stage simply because they are the home team. Not much more after that. The Bafana Bafana are nowhere near as strong as their inaugural squad in 1998 (once Apartheid was abolished they were allowed into FIFA). Pineaar (Everton) is a bright spot.

There you have it. It all starts tomorrow so start enjoying a nice prelude to the World Cup 2010.
Posted by R. Mera Velásquez at 12:43 PM