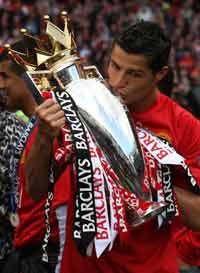 It's official. $130 million for Cristiano Ronaldo. Real Madrid is close to being Galacticos once more having added Kaka to the mix a week ago. What's next? Plenty of names and somehow a lot of money. This team could very well rival the Zidane-Becks-Ronaldo team of the early 2000s. Crazy! Now if only they could share some of the money with the world economic crisis, right? There's the socialist in me.

What's next for Man U.? Maybe Frank Ribery and/or Benzema. They are also, I hear, looking at Wigan's (and Ecuador's) Luis Antonio Valencia. Missing Ronnie will be a big blow to their offensive prowess but that's how club football is player around the world. They should be fun to watch next year, right?
Posted by R. Mera Velásquez at 10:48 AM

Go ahead and book your tickets to the Champions League Final Real Madrid fans.