There's no fate but what we make: USA defeats Spain 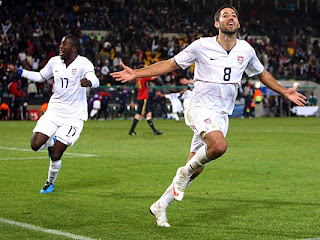 Pure magic. USA wins in the Confederations Cup semifinal, beats Spain, the number 1 team in the world, and advances to its first international final outside of the Gold Cup. This is for all the naysayers, doubters, non-believers... and I count myself in. If Dempsey redeemed himself (in the eyes of many) then Jozy today proved why he is the future of soccer in this country. The game was full of class, composure, speed, gritty defense, great goal-keeping and also a bit of luck. (Yes, I'm guilty of not watching the game live, courtesy of a research trip to Boulder, Colorado.)

Crank up those vuvuzelas. And this is the team we were doubting after the Brazil match? Where's the Rossi hate now? Doesn't he wish he could be on this US team? There were so many positives today and not enough praises for what could be an historic moment in US soccer history. Never mind what happens on Sunday. The win today cements the US Soccer Federation and the American game in general as a new force in the world scene. There is a long way to go still, yes. But somehow a US presence in the latter stages on the World Cup within the next decade are no longer the stuff of dreams.

Cheers, boys. Thanks for making us dream. Thanks for earning our game the respect it deserves. This is an incredible triumph, regardless of what the outcome may be on Sunday.

PS: That was not a red for Bradley. Refs are being a bit dubious in this tournament with the US. He will be missed in the final.
And now the goals:

Too bad Brazil won, I was hoping to see them play Spain. In the third place game of course.