It was a nail biting experience. Down in the first 5 minutes at home versus a rising Honduran team in front of an unfriendly crowd. Wait, I thought this was a home game. Nope. Not when you have your players play an important qualifying match in a major city, easily accessible, to a crowd with significant presence in the United States. It was 0-1 on the scoreboard in Chicago. 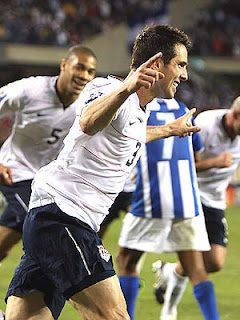 But this was different. No Marvell Wynne to leave open spaces, no Beasley in an unnatural left back position, no Bradley or Torres in midfield and, again, no Ching. Instead we had Conor Casey (top scorer in MLS at the moment and with Bundesliga experience) with Altidore. Spector did his job at right back (although the position is still up for grabs), Bornstein cleaned it up on the left side and Clark was surprisingly strong in the defensive midfield. 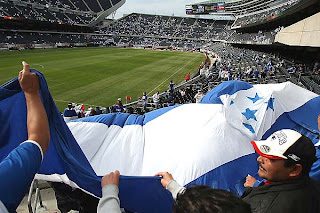 As the first half wound down it was a Donovan penalty for a well deserved tied score at halftime. Then came the spark of Benny Feilhaber (Aarthus, Denmark), substituting an absent Mastroeni. Things started to roll again. I was cheering for Benny to score another stunner in Chicago, as he did in 2007's Gold Cup in the final against Mexico, but instead we got tremendous possession and play as a creative role in the middle of the pitch. I highlight him because of all the bad press he has gotten for the past 2 years after two injuries and bad form. He just plain showed why he deserves a spot in the current squad when veterans like Mastroeni are down or yellow card fears impose a change on the field. Benny was there for it and should remain in contention for a supersub at worst.

Finally, let's rewind to the game winner... A corner kick, always an important weapon in the Americans' arsenal, a re-centering of the corner by Dempsey, and an opportunistic head-dive by Captain America Carlos Bocanegra. Never mind the fact that he could have been injured by the defender, or the fact that he actually did get injured later in the game. It was a goal. The (American) crowds went wild and South Africa looked a step closer. More so with Mexico's defeat at El Salvador. The US is now in second place with 10 points, 2 behind Costa Rica, 5 clear of 3rd place El Salvador. This qualifying round will be down to the last game, it looks, and there may still be a game against a South American team for the final play-off. This could be true for Mexico or even the US. Ouch. 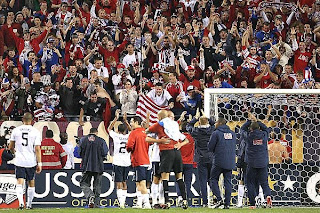 Glad to see the team rebound, but you are right there is a long way to go for advancement.

Spector and Benny F need to stay in the lineup. Mastroeni and Casey need to be out while Torres also needs to be in for a full 90 most of the time.