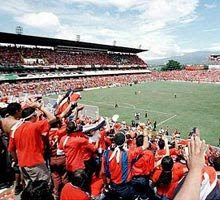 Tomorrow night Costa Rica will face off against the United States national team in a key World Cup qualifying match. Perhaps one of the more intimidating venues throughout CONCACAF, Costa Rica's Estadio Saprissa will test the US national team harder than Wembley itself. Why? What's at stake. This isn't a friendly on an international date. It is a game that can decide the future of both teams, change their status in the region, and put pressure on other teams like Mexico and Honduras to perform at their highest potential to evade exclusion from the World Cup or the dreaded playoff with CONMEBOL's 5th place team.

This is also a test of mental fitness for the players. It's important to note that the current crop of players is comprised of experience (Ching, Donovan, Bocanegra) and youth (Bradley, Altidore, Davies). Their focus on the game, understanding with each other and possession of the ball will be the key to this match. Coach Bradley has picked Mastroeni and Ricardo Clark as possibilities for the midfield due to their experience (especially Mastroeni) with Costa Rica. Maurice Edu and Frankie Hejduk will miss the match due to injury while players like Pearce and Kljestan have recently fallen out of favor with the national team as well as their respective clubs. The back line will likely be comprised of Bocanegra and Onyewu in the middle, Spector (right) and Beasley/Bornstein (left). The left flank would be the most dangerous spot, especially if the coach decides on a more defensive stance with a lone forward (Ching). I pick Torres, Bradley, Donovan and Dempsey in midfield with the Ching/Altidore tandem up front. From what I hear, the pitch is artificial turf laid 5 years ago and with significant wear from games and weather.

About the Ticos. I won't go into too much detail when it comes to previous matches with the US in world cup qualifying. For that you should look at this great story. To me the Ticos represents the best from Central America from a historical perspective. They have had near continuous presence in the ecumenical event for all tournaments in the present decade. In 1990 they had an excellent run that took them to the round of 16 after beating both Scotland and Sweden. Those were the days of "el Conejo" as the goalie. Their recent form in the World Cup has been less than stellar with blowout losses to Brazil (2002) and Ecuador (2006) that excluded them from the round of 16. Current stars include Segares, Navas, Furtado, Ruiz. All capable players with a long line of success.

My prediction. Costa Rica 2 - USA 0. This should be considered as one of the matches the US team can count as a loss. Any points rescued from this match would give the US significant advantage going into Saturday's match against Honduras in Chicago. Tomorrow's game is on ESPN live at 10PM ET.
Posted by R. Mera Velásquez at 1:11 PM