GOLEADA!!!! US falls to Costa Rica

Costa Rica 3 - USA 1. I underestimated the Ticos score on my previous post. I said 2-0, they gave me 3-1. What went wrong? Defense. Plain and simple. Missing pieces also a given. No Hejduk meant no de facto right back and either Wynne or Spector would get the call. I would have chosen Spector. Wynne started the game instead 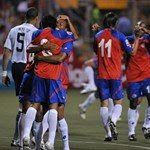 . Beasley on the left once more effectively cutting back on the attack front that looked muted without Ching. 4-3-3 was a gamble and this time it paid negatively. Such a formation would have made more sense with the likes of Edu and/or Hejduk involved. No word on where Cherundolo is.

Goal 1: No one stretches out to tackle the guy (no Beasley, Torres or Bocanegra), the Tico gets the right bounce and a nicely placed goal.

Goal 2: Inexcussable play around two of the defenders leaving 3 vs 2 in the box with another US player outside of the area. Center of death to more than one wide open Costa Rican. 2-0 in the 13th minute!

Goal 3: Very sad. No one should let a player get around two defenders (in this case one was Michael Bradley). A shot to the near post and a score.

Note, however, that Costa Rica didn't get that many shots on goal. 6 or 7 by my count. 3 went in due to sloppy, careless defending. I hold with those that said Wynne is too inexperienced for this level of play. His speed was negated by poor touches and a lack of awareness. Some positives include a crafty Torres that had nice moments before stepping out for Kljestan. Kljestan actually performed much better in this game. Donovan was composed (scored the PK in injury time) and defending well also. Adu and Davies injected a lot of creativity and speed into the game late in the second half. Finally, Jozy Altidore performed admirably. He created spaces, drew fouls and kept possession when needed, including winning a few contested balls.

I wanted to take something else positive from this game. I'd like for the talented teen or preteen in America that was watching the game to say to themselves, "I want to play so that we don't lose like that again." That's how you make winners. We fall sometimes to get ourselves up again. Up next is a must-win against Honduras on Saturday night. No Kjlestan or Bradley. Torres and Clark/Adu will need to step up. Robbie Rogers, Conor Casey, Pontius are all waiting to be called. Loss of points this weekend means you shouldn't make plans for South Africa so soon. I'll be back with my preview of the game against the "catrachos."

Costa Rica had their 8s and 9s. I'll redo them... You might be right for some of them.