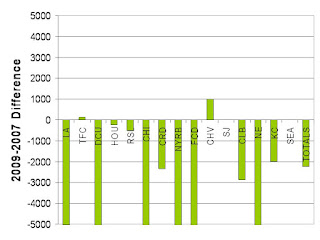 Two weeks in one update... International dates are gaining momentum and attention these days. Lately RSL has somehow come back to have two near sellouts in their home showings. Not bad. Right now I'm watching a very discrete game between Dallas and San Jose at the Pizza Hut Park. Empty seats abound.

Looking back to a difference between current attendance average figures against the final figures on 2007. It's basically the same pattern as 2009-2008 difference except for Chivas, which has gained momentum recently both on and off the pitch. A nice turn of events, no?
Posted by R. Mera Velásquez at 3:49 PM