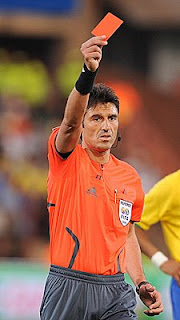 Red cards, red cards, red cards. A 3-0 loss against a classy, albeit not awesome Brazil. What went wrong? Everything. If the game against Italy was a steal (not a red card for Clark, no reds for two Italian offenses) and a dignified game for most of the squad, then today's game made us look more like New Zealand or Canada in the last Confederations Cup. DeMerrit and Bornstein were often beaten whilst Spector (he should keep the job) and Onyewu held their own. I'm not sure why B. Bradley would start Beasley and Kljestan in favor of Feilhaber, Torres or even Adu. He had his reasons, and although I thought Beasley had a chance to redeem himself, he once again showed why his place with the nats may be expiring.

I'm also questioning players' ability to show off for European teams. Besides Landon Donovan and Oguchi Onyewu I don't think the rest of the group merits a second look. Let's hope the Egypt game goes better for our national team. Pride alone is at stake. No red cards please. For once, as much as it pains me, I have to side with Trecker.