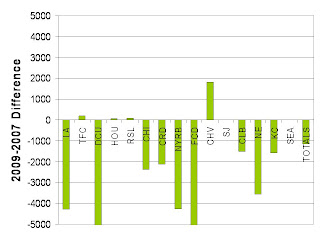 And we're back from international play. Whilst some of our ambassadors abroad are struggling for playing time (Onyewu, Bradley, even Adu again), and others are making their mark (Torres and Orozco in Mexico), our own MLS is coming down to the wire. Arena's Galaxians are close to an automatic playoff berth as long as they don't implode as they did versus Dallas this past weekend. So, are people coming to the games? With the NFL and college football in full swing, it would be hard to see many full MLS games. And yet some manage.

Chivas has lost some of its attendance impetus but places like DC, Columbus and Salt Lake City are making up ground and/or exceeding it. A look below at difference between 2009 and 2007 shows how the fall of Beckham has strongly affected their attendance numbers. Also notice, however, that places Chivas has actually seen an increase and Toronto, Houston and RSL (strong markets) have remained about the same. Clearly, ground for improvement but also nice positives as well. Hopefully some of the weaker markets can learn to emulate the stronger ones.
Posted by R. Mera Velásquez at 11:35 PM

I'm surprised for the low attendance in Columbus-Houston. Top chart rivalry for leadership and winners of the last three MLS Cups

It was about 15K at ~75% full. Taking into account NFL starting, I think it's a good number relative to their stadium size.

PLEEZE DC United either try to sell RFK or fix it up. You have great fans who are enduring this makeshift, 55-year-old hole of a home venue. Ownership has to find some way to push forward with plans for the Anacostia park, or admit it's not gonna happen and spruce up RFK.

Enough is enough for the top franchise in the history of the league...

I'm from Spain, I didn't know the NFL had started. :)
How much does it usually affect the attendance in MLS?

15k is not bad, i know, but last game in CLB was almost 20k and I expected a much better attendace vs. direct rival for Supporter's Shield.

I'm not entirely sure of the extent at which NFL affects MLS attendance. Also keep in mind that the game was in Columbus and that they are big in their college football.

Also, if you were referring to last Saturday (Sept 12) Ohio State University in Columbus had one of their biggest home games of the year, against another traditional college football powerhouse Southern Cal. College football is far and away the biggest sport in Columbus, well ahead of their soccer and hockey teams in terms of support.

thanks for the info, Alastair