Strength and honor: US beats Trinidad and Tobago 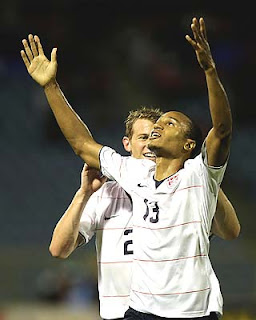 I admit to being wrong on my last post. The defense looked stout despite a few Bornstein mishaps and Spector's injury at the end of the game. It was Ricardo Clark, the Livorno-bound man, that broke the stalemate and catapulted the US to the top of the Concacaf table after El Salvador and Mexico won their respective games. The score of 1-0 was telling of the hard-fought, physical match that we had expected.

Altidore did not repeat his hat trick this time around, and there was no "stanky leg" for Davies but they showed up and played the game. Donovan missed a few opportunities but remained the #1 man for the US. Holden again showed his supersub status as well as Feilhaber. I would rather have this starting line-up from now on.

I can't say too much more about this game since I had to DVR it due to prior commitments and basically fast-forwarded through most of the game. Cheers, USA. We can breathe a little easier now. Things are still tight, however, and it looks like it may come to the last day of qualifying for the US to advance. They will, however, only need a tie at that point to qualify if Honduras (vs USA) and Costa Rica (vs T&T) win their respective games.

No ratings today as I did not watch the game in its entirety.

Yes, Furman definitely did it again. ;)