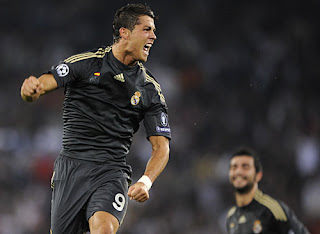 I was hoping for an amazing game when I took time off to see Inter host Champions League title-holders Barcelona. Instead there was missed chances and too much defense. Well, actually mostly defense from Mourinho's side and lack of a finishing touch with Barca. Indeed, Samuel, Julio Cruz and Julio Cesar performed admirably by frustrating the Messi-Ibrahimovic-Henry attack. Inter also lacked commitment getting forward and a true #10 and possession. Eto'o looked lonely and Milito lived offsides. Aside from the finishing touch, Barcelona continues to look extremely dangerous and will be difficult to defeat as we move forward with the current version of the Champions League.

Elsewhere in Europe, Real Madrid looked like the kind of team they are supposed to be by beating Zurich 5-2 with Cristiano Ronaldo giving another scintillating performance. It would be a pity not to see him in next year's World Cup. Xabi Alonso and Arbeloa also seem to have improved by joining this Real Madrid team, not to mention Kaka.

Manchester United also looked powerful going forward with Nani, Valencia and Scholes. Pairing that midfield up with Rooney and Berbatov is pure dynamite. Even much-maligned AC Milan showed up at the Vellodrome to snatch all three points away from an impressive Marseille that now includes Gabriel Heinze, Lucho and Falcao.

Other teams like Bayern Munich, Liverpool, Lyon, Sevilla, Chelsea, and Wolfsburg maintained their dominance over smaller teams. Surprises are present too, however. Juventus and Atletico Madrid were unable to come away with wins. It's early in the process and there are many more top-tier soccer stories to be written. I'm holding Madrid, Barca, Man U and maybe Wolfsburg as the final 4 at this point. Things can always change.
Posted by R. Mera Velásquez at 4:37 PM

The end of the last couple years domination by the English Premier League? They have had the semis on lockdown.