This Is It tour: September qualifiers

Yes, I'm alluding to the King of Pop's ill-fated final tour. He never made it, and as of right now, some countries might be on-the-outside-looking-in come the October qualifiers for South Africa 2010. So the allusion has more than one connotation here. If you thought the Confederations Cup was awesome, just wait till this weekend to find out why international soccer is the best type of soccer in the world. Marquee matchups, lots of stars, huge implications, you name it. 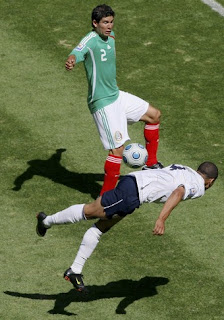 Let's start with our home planet of USA and our home galaxy of Concacaf. We saw how the US faltered at the hands of mighty Mexico and in the shadows of the majestic Azteca. Will the boys that beat Egypt and Spain in the Confederations Cup show up this weekend (vs El Salvador) and next Wednesday (@ Trinidad)? I sure hope so. Three points are acceptable. Four points are a minimum. Six points are a must. Why? Because right now the US is sitting in third place (10 pts) behind Costa Rica (12 pts) and Honduras (10 pts, better goal differential). Getting six points means they go to Honduras in October to snatch away points and then home vs Costa Rica to keep all three. And Mexico? They go up against Costa Rica at the so-far impenetrable Saprissa stadium; then home vs Honduras. We have to hope they stay with only three points. Why all the fuss, though? Because the fourth place goes up against fifth-placed South American. Right now that could even be Argentina. 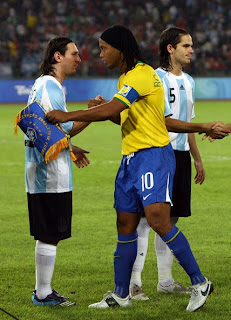 Down to the land of Andes and Amazon we go. Ecuador should hope to get at least four points from visits to Colombia and Venezuela if they have any hope of landing a fifth play-off spot at least. But the most interesting situation is Diego Maradona's Argentina. In fourth place at the moment, the "gauchos" have a home game against first place Brazil and then a visit to difficult Paraguay. Argentina-Brazil game is at 8:30PM ET and you can catch it here or here. Just follow links to the "sports" sections of those websites.

And Europe? Holland is already in. On the verge are Germany, Spain, and England. In danger are Italy, Portugal, Sweden, France, Denmark, Greece, and Switzerland. All could qualify. All could be out, especially CR9's Portugal. Good matches to watch (online if you can or ESPN or FSC) are Denmark-Portugal, Switzerland-Greece, and France-Romania.

Asia is almost set. The Koreas are in; surprisingly Kim Jong-il's team is finally back in the competition after three decades of absence. Japan and newly Asian-conference-switched Australia. A playoff between Bahrain and Saudi Arabia will decide who plays against New Zealand for the last spot. No Iran this time around.

Africa is looking interesting with Gabon ahead of Togo, Morocco and Cameroon (personal faves). Tunisia and Nigeria are fighting it out, as are Algeria and Egypt. Ghana (my lab mate's country), and Cote d'Ivoire are almost in.