Short term memory: Costa Rica fires coach and what it means to the US 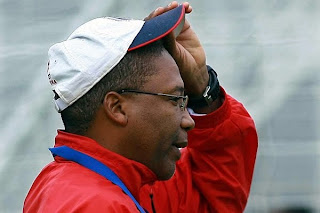 Rodrigo Kenton, the coach for Costa Rica since the start of the second preliminary round of qualifiers was fired yesterday due to the team's poor form. Short term memory indeed. After the Ticos started the Hex (Hexagonal final round of Concacaf) with wins at home versus El Salvador, Honduras and the US as well as an away victory at Trinidad and Tobago, they were able to accrue 12 points and were poised for another World Cup appearance. Flash forward through a disappointing exit from the Gold Cup using an almost-full-strength Costa Rica against a half-strength Mexico in the semifinal, coupled with three straight losses and shutouts in the Hex, and you get an ailing soccer team in dire need of change.

Does this make sense and/or sound familiar? Examples are Mexico and the US. And while Mexico fired several coaches until Aguirre stepped in to rescue the team, US faltered on several occasions but Bob Bradley kept his job. Reasons for Kenton's firing abound: pressure from the media and the federation, poor string of results, etc. Common practice in soccer and many other sports. It seems to be working for Mexico, although they started the Aguirre cycle less than half-way through the Hex. Is it working for the US? Would Mexico or Costa Rica have fired their coach after losing the Confederations Cup and Gold Cup finals and also lost important road points in the hex? We will never know because that's not how the USSF works.

And now Costa Rica has to start from scratch at 80% of the way through the final round of qualifiers. Some names being mentioned for the job are Leo Beenhaker (T&T in 2006) and Jose Pekerman (Argentina in 2006). That spells trouble for the USA's final match against the Ticos on October 14. Remember that a Costa Rica win (assuming they take care of T&T at home) would leave the US out of the top 3 if the US loses against Honduras on October 10. New blood in the managerial department could change the fortunes for the Ticos. With a playoff against Argentina/Ecuador/Colombia/Uruguay in the horizon, nobody wants to be in 4th place.

It's too early to tell what might happen. It's a silly move by Costa Rica this late in the game but then again, they dropped a 0-3 decision at home versus direct rivals, Mexico. They followed this with an injury-time loss at El Salvador. The outcome of this is complicated. Ultimately, it's in the US's hands to get at least a tie at home in their game against Costa Rica. As Donovan remarked, if they can't come away with a point from that game then they don't belong in the World Cup. The US Soccer Federation lacks the pressure and sometimes even the drive to make important changes in the structure of its teams and management. It could be said that missing out on 2010 might actually incur some restructuring of the federation and act as a wake-up call to follow through on further developing the sport in this country. Let's hope that this is not the case. The players and the talent is there to be present in South Africa. The team just needs to win the big games and the last two certainly are.
Posted by R. Mera Velásquez at 10:18 PM

I was puzzled to see that bit of news, thanks for the background!