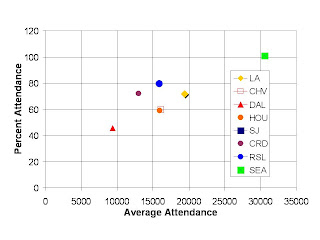 Quick update. Becks not making much of a change thus far. With some saying that the problem now lies more with TV ratings for MLS matches, I almost feel like I should be getting my hands on that sort of data. In a forum on the matter, I suggested that nationally televised shows on ESPN be limited to good rivalries with decent turnouts in order to get people excited about watching the games. Places like Toronto, LA, Seattle, and sometimes DC are prime for this sort of TV coverage. It's not a bad idea to follow Beckham around since it attracts more people to games. It's sad to see empty stadiums for playoffs in places like New England. Keep in mind that these games happen at the cavernous Gillette stadium.

What's another television-friendly venue? Really small stadiums like Buck Shaw and Community America Ballpark. Back to attendance. I always like to do the relative attendance since it shows how full any given stadium is relative to their MLS capacity. Note that MLS capacity may be smaller than the actual stadium capacity (Invesco, Gillette, Giants, etc.). A good relationship between the mean and relative is shown below.
Posted by R. Mera Velásquez at 12:27 PM