For those of you unfamiliar with South American soccer, there is another Barcelona soccer team. It's not Spain's FC Barcelona, it's Barcelona Sporting Club of Guayaquil, Ecuador. The "Idolo del Astillero" also happens to be the most popular team in the country and one with the most fame (until Liga won the Libertadores last year). It's the Manchester United, Dallas Cowboys, New York Yankees, etc of Ecuador. So if the team is relegated to a lower division it has to be a big deal.

Indeed, Barcelona are very close to being mathematically and officially relegated to Ecuador's Serie B. I must admit I haven't been following the game in my birth country as much due to other things in life getting in the way. I can only watch so much soccer and usually I reserve my Ecuador time to the national squad and my club Emelec.

A little background info: The team was founded in 1925. Contrary to what one may think, the team is not modeled or based on FC Barcelona, but instead it is an homage to Spanish support for the founding of a multidisciplinary club and the city of Guayaquil. The team is currently tied with Club Deportivo El Nacional as the most successful team in the country in terms of national championships (13 titles). They were the first Ecuadorian team to make it to the Copa Libertadores finals, having done so twice in 1990 & 1998. Notable players include Ruben Insua, Manuel Uquillas, Agustin Delgado, Pablo Palacios, Jimmy Izquierdo, Ivan Kaviedes, Eduardo Hurtado, Marcelo Trobbiani, Jimmy Montanero, Byron Tenorio, Edwin Tenorio, Mario Saralegui, Ivan Hurtado.

Today things look ever-grimmer for this iconic club team. They could, with a mix of results, sneak back into safety. This predicament is not unlike what happened nine years ago, when the team had to go to Ambato in search of a positive result to avoid relegation. The team delivered and the relegated squad was Liga de Quito. That's right, the reigning champions and the 2008 Libertadores and 2009 Recopa champions. It took seven years after falling to the Serie B for Liga to bounce back and storm into the international scene.

Could we see a major turnaround from Barcelona? Why not. It happened with Liga. True, it's the governing body that is to blame for their errant ways for the past decade or so, as alluded to by important members of the Ecuador press. The great Mauro Velasquez has mentioned to me the weaknesses and ambivalence that the club management has continuously shown. I would welcome a stronger Barcelona team to give Emelec better competition and elevate the status of the game in the country due to the team's considerable following. 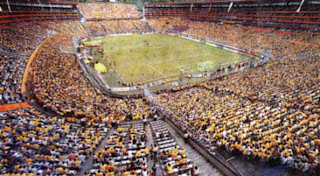 Am I happy that Emelec is much higher in the table and competing internationally? Of course. Am I happy to see Barcelona falter like this? Not really. I like competition (especially if Emelec always wins) and right now there just aren't any more teams in the city of Guayaquil. This is the clasico. This is the city derby. There can be no yin without the yang. Some of my earliest soccer memories are those of "el Clasico del Astillero," including those in the 1990 Libertadores. I've been to five of the games already and I can't wait to go to the next. So, good luck, Barcelona. Emelec is waiting for you to break your heart again.
Posted by R. Mera Velásquez at 10:47 PM

So basically you want to pick them up when they are down so that you can kick them down again. Inspiring.

More or less. I like the competition. I also like when Emelec beats them silly. Can't beat the stadium atmosphere. It's better than any sporting event I've been to.

The chanting and the singing, the drumbeats, they all combine to make soccer a sporting event unlike any other on the planet. Hope I can attend an Emelec game with you in the future.