Don't count them out yet: US U-20 trounces Cameroon 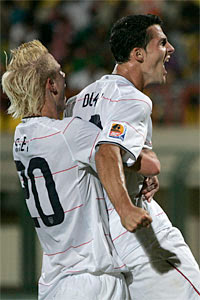 The US responded to their lackluster performance (0-3) against Germany with an equally (positively) impressive 4-1 win over African powerhouse Cameroon. First, I will not react to this prematurely. I saw patches of the match (30% of it, really), but what I saw today was a team vastly different from the one that played against Germany last Saturday. For all the doubters and non-believers, myself included, the team showed composed, dangerous and happy. Rookie mistakes abound and Opara's silly foul and conceded penalty is a reminder of this. They are under 20 after all.

Most notably in today's match against Cameroon was the inclusion of Bryan Arguez and Dily Duka (my favorite name right now). Both came on as substitutes versus Germany but emerged as starters today. And both showed why they should be on the pitch from now on for this team. Arguez plays his trade in Germany with Hertha Berlin, although he has been less than impressive with the Bavarian squad and mostly plays with the reserves. Duka is at Rutgers. Yes, as in New Jersey's university. I can see Arguez moving out of Hertha (perhaps on loan) and Duka also finding a good team (if he chooses to skip out on the next two years of college). Ownby and Taylor added to the score. Ownby was killed by the US soccer media and it's nice to see him respond with a goal.

In the end, they were all great goals and fun to watch. No highlights here but you can go to the FIFA site instead. Up next is difficult Korea, which tied Germany 1-1 today. Right now, as in the Olympics of last year, the US is in control of its own destiny. A win against Korea will send them through to the next round. The match should be about defense and avoiding mistakes. Korea will be looking for a win as well. It might be nice to see this modest American team shush its criticizers for once. Good luck.
Posted by R. Mera Velásquez at 7:43 PM