More of the same: MLS vs Mexican teams 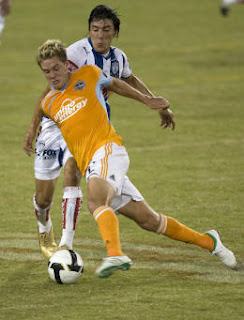 Wow. Now that's 0-6 for three separate MLS squads versus their Mexican counterparts. All three teams, DCU, Columbus and Houston have failed to score a victory or even a tie against their Mexican rivals. Why is this so? Clear dominance. Bad luck. No reserve league. Call it whatever you want but the sad truth is MLS just cannot cut it against their Concacaf rivals these days.

Our two sentinels, Houston and Columbus Crew, both with impressive home records and en route to a possible MLS cup final, were outscored by a combined 0-10. Columbus, our current champs, were thumped 5-0 by Cruz Azul in Mexico and went down 0-2 in Columbus (the home field for the American national team). I wouldn't feel so bad if it weren't for other teams in Concacaf like Arabe Unido (Panama) and Marathon (Honduras) winning their respective home matches against Mexican teams. Both have put DCU and Houston in very precarious positions. Houston might have a better chance assuming Pachuca can take care of business at home versus a Panamanian side that spanked them 4-1 earlier in the tournament. For DC United, despite their impressive multi-goal wins against Jabloteh and Marathon, need a result whilst visiting mighty Toluca.

That's my rant for today. No real answers and too many questions. There are more important questions and problems with MLS, yes. Team pride, credibility for the league, and international recognition are just as important as marketing and big stars in world football. Perhaps this is what upsets so many fans. Then again, could it be that there are American fans that don't care about their team's games outside of MLS? An interesting question .
Posted by R. Mera Velásquez at 10:12 PM