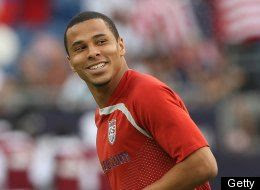 It suffices to say that by now the American soccer community is aware of Charlie Davies' medical struggle. "Chuck D" suffered a car accident during the early hours of October 13th that included an unfortunate fatality. He underwent six hours of surgery for fractured bones in his right leg, left elbow and cheek bones, added to a lacerated bladder. US Soccer staff and the doctors involved were unable to project a timeline for recovery and if and when Davies would get back on the pitch.

This story has really hit home for me on a very personal level. I too was involved in a catastrophic accident and pulled out of it through sheer act of will and help from family and friends. My injuries were neurological and thus less efficiently treated. I can only hope that Charlie's injuries remain musculoskeletal in nature. He is an athlete and is more than capable of fighting through injury. Added to this is the significant amount of rehab he has access to as a professional soccer player. And friends and family and fans in America, Sweden, France, the world will be with Charlie.


We will miss him on the pitch in South Africa. We will miss his happiness with the ball, his fighting spirit, his lighting pace, his resilient nature, his patented smirk, his one-two punch with Jozy, his stanky leg. But he will return, rest assured. We will see him play in Brazil in 2014. He will score the goals that will get us there. He will be our stallion on the field. He will be our American hero.

Congrats on getting stanky leg into a post. I am numb.