To win away from home 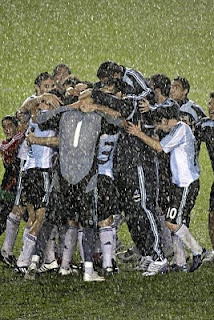 It's tough. No doubt about it. And Wednesday's matches for the last chance to be in South Africa presents must win situations away from home for a plethora of teams. Most important, and with interesting consequences, are the Conmebol games involving Ecuador, Uruguay and Argentina. The latter two play in Montevideo in a game that could result on either one missing out on next year's tournament. This, along with Ecuador's game versus Chile, will decide the fourth and fifth places for South America. A win by Ecuador in Santiago would push the loser of the first contest out of South Africa. A tie between Ecuador and Chile means that a draw between Uruguay and Argentina is enough for them to qualify. A loss by Ecuador has the same consequences regardless of the outcome of the Argentina game. Further, both teams are looking for the direct route to the African continent by bypassing the playoff with Concacaf (Costa Rica or Honduras).

The story does not stop there. For Honduras and Costa Rica, winning away from home in hostile environments will decide the final Concacaf spot and could pair the lower seed against mighty Argentina in order to book their ticket to the World Cup. Honduras is headed to El Salvador (unbeaten at home but already eliminated) and Costa Rica makes the trip to our nation's capital to take on an already-qualified USA. El Salvador will not escape the opportunity to end the tournament on a high note after having had memorable games (and wins) in the Estadio Cuscatlan. The US, on the other hand, are looking to win the Concacaf group and claim the title of the region's top team.

But this predicament is not isolated to the American continent. In Africa, for example, a duel between Algeria and Egypt will decide one of the final spots for the African region. Algeria can clinch its first appearance in a World Cup with a draw in Cairo. Egypt is looking to return to the tournament after a 20 year absence. Elsewhere in Africa, both Cameroon and Gabon need wins at Morocco and Togo in order to qualify.

Let's not forget Europe. Israel (vs Switzerland) and Ukraine (vs Andorra) and Croatia (Kazakhstan) all need results away from home to advance into the tournament. Finally there's lowly Bahrain taking on New Zealand for the last Asian/Oceania spot.

Sorry to see your Ecuador bow out at the last round. It's tough to know how already qualified teams (i.e. Chile) will play. USA were worried about accumulating cards that would result in suspensions. But at home you have to think they'll give their all.

It would have been incredible to see mighty Argentina scrambling in the playoff tie!