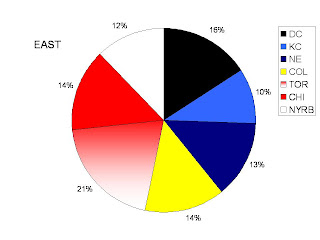 Seven months. Fifteen teams. Eight playoff spots. Two conferences. One winner. As it stands, Columbus, Houston and LA are the teams to beat in the MLS playoffs. I'm not crazy about the system that's in place but I understand it and enjoy it all the same. This was a transition year. A transition because the Beckham experiment unraveled. Also because the Seattle Sounders showed the large support there is for the game in the Pacific Northwest (Portland and Vancouver are the expansion teams in 2011). And finally, it was a transition year because the biggest markets also had the worst attendance records.

I will let the figures on the right column speak for themselves, but I offer some final thoughts for this MLS attendance season. 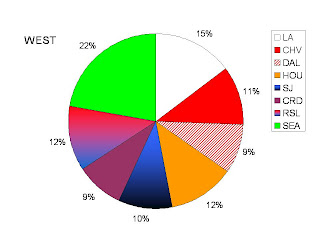 A final look at the distribution of general attendance shows the clear winners in Toronto FC and Seattle, the strength (even though diminished) of big markets like DC and LA. Dallas and Colorado clearly need improvement... and don't let the stadium size factor fool you... just look at all the figures in terms of average, relative and median attendance.
Posted by R. Mera Velásquez at 12:34 AM