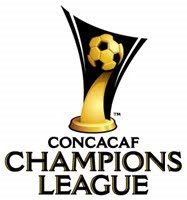 No, not UEFA. We're not in Europe, even if our style and players are more suited to the European game. I'm speaking of the Concacaf Champions League or the Concachampions, whatever you want to call it. Christened last year as a substitute for the Concacaf Champions Cup in order for the conference to emulate other tournaments around the world that have a longer period of midweek play or perhaps to cash in on the new MLS designated player rule. Whatever the reason, it's been miserable for MLS. Last year only Houston made it to the quarterfinals and were booted off in their first game. Somehow USL's Puerto Rico Islanders made it to the semis.

This year, Columbus punched its ticket to the quarterfinals thanks to poor play from Costa Rica's Saprissa. The Crew has done exceptionally well, save for their game against Mexican foes. Houston, however, failed to win against Metapan, a Salvadoran team that was outscored 0-17 prior to last night's match. Somehow, though, they were able to score 3 goals on Houston, enough to win 3-2 and leave Houston out of the quarterfinals. DC United will be hoping that winless San Juan Jabloteh can beat or tie Marathon (Honduras) to get past the group stage.

It suffices to say that right now MLS just can't cut it internationally. Last year both Chivas and New England were booted off the competition by teams from Panama and Trinidad. I give full credit to those teams, but we have to look at this objectively. I don't know if it's lack of experience or lack of motivation for players with matches outside MLS (Quaranta was quoted at one point saying that he wasn't as interested in matches outside MLS but instead wanted to focus on playoffs).

Another point is the lack of a reserve league when these games happen near the end of the MLS regular season. There just aren't enough players for all these tournaments. I think that until the reserve league is reinstated (no hurry with the economy as it is) then we can expect more international failures. No qualms. We just don't have the arguments at this point. The MLS - Mexican league matchups left us with an 0-6 record. The league should, at this point, continue to concentrate on building its fan base here in the States, build more stadiums, and solidify their teams. At some point, though, true fans of the game will want international success. It's part of club soccer around the world and it brings prestige to the league, not to mention a degree of accreditation that MLS lacks right now.
Posted by R. Mera Velásquez at 11:06 AM

I think from what I know that the tournament lacks the prestige here that would cause coaches in MLS to put the needed emphasis on the tourney. It would be interesting to see how many regulars are benched in these games on average vs. a regular season game or more importantly a MLS playoff match. I find it hard to believe our talent isn't comparable (or hopefully superior) to these other teams we are losing too.

I think they just don't have the need to win these games. It doesn't reflect on much for the players themselves. MLS, to its own merit, can export players without the need for international play... but that comes with players making the national team, i.e. Jozy, Dempsey, Bocanegra, Howard. Winning this tournament sends them to the Club World Cup... more eyes to watch the teams. Ultimately, the Libertadores (South America) is a much better and attractive option. It's okay for a club to ignore a tournament like say, the Carling Up in England, but not when other equally talented (Mexican) teams roll over every other team. Just keeping up with Mexico should be enough motivation.