Every journey has a first step: The October qualifiers 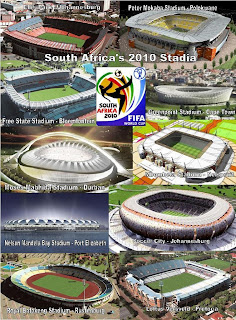 It ends on the 14th. Sort of. World Cup qualifying will, for the most part, end next Wednesday as all conferences play their final games. All that will remain after the epic contests of Saturday and Wednesday will be the play-in games: one between Concacaf-Conmebol and the other as a play-off between second-placed UEFA sides. It is well known in the soccer communities that at least five of the biggest names in soccer may not be present in South Africa next summer. Included in this list is Cristiano Ronaldo, Messi, Ibrahimovic, Eto'o and Adebayor. Most blatantly obvious is the fate of CR9 (Portugal) and Ibra (Sweden) as they are both in the same group, which is dominated by Denmark. Messi may have the least to worry about since Argentina host bottom-dwellers Peru on Saturday. Adebayor (Togo) and Eto'o (Cameroon) are both in the same group... and only one can remain. Oh, and try to catch the Oceania-Asia playoff, Bahrain - New Zealand. Should be entertaining, no?

Perhaps one of the juiciest contests is Germany-Russia in Moscow. A win would probably book a trip to the cup for either team. Germany needs a draw to be in, assuming both teams win the subsequent games. Sweden needs travels to Copenhagen in search of a win. Portugal has it easier hosting both Hungary and Malta. France will have only itself to blame if it can't produce a result at home versus Austria and Faroe Islands. Kudos to Bosnia for being on the verge of their first World Cup. The Italian champs are also near the finish line. A draw versus Ireland will suffice (note that the Irish have a knack for beating the Italians in important games.... think back to 1994). The match is in Dublin. 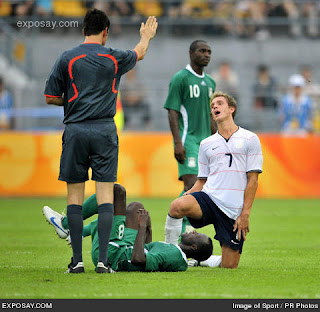 Back to Amerigo Vespucci's continent we come: Mexico and the US can both seal their ticket to South Africa with wins on Saturday. Mexico has it easier in a game versus almost-eliminated El Salvador. The US has to visit San Pedro Sula to take on Honduras (8-0-0 at home this round of qualifiers[no TV for this game]). With Dempsey out injured, DeMerrit sidelined with a freak eye injury, and a weak left back option (no Castillo due to injury), it will be difficult to avoid a loss, if not a catastrophic result by a three goal margin. Things are bleak indeed. Look for Holden to get the nod in place of Dempsey and Bornstein to suit up at left back. Added to the calamities are the possibilities of yellow card accumulation for the following match against Costa Rica for just aboud everyone in the team. Yes, it could all come down to RFK stadium on Wednesday 14th of October. A win at home versus T&T will put Costa Rica at 15 points, 1 less than the US. This means the winner of the contest on Wednesday would get the automatic spot in South Africa... and the loser? Argentina? Sort of...

Down south we travel. Somehow, Maradona, the savior, did not have the "hand of God" as coach and the "albiceleste" is in 5th place behind Ecuador for the playoff spot versus Concacaf 4th . With a mix of results, they may breathe easier by Sunday morning if they are able to take care of Peru. Chile is looking for its first appearance in a World Cup since 1998. A tie will suffice for at least the playoff spot. They are facing a hungry Colombia in Bogota that require all three points to stay alive., although a tie and a mix of results keeps their chances on mathematical life-support. As for Ecuador, their fate is in their hands. Twice it has come down to this contest against Uruguay at home in Quito. Twice they drew level and were propelled to the World Cup. A tie won't quite be enough this time, however. Things will still come down to Wednesday when they travel to Chile. Cheering for the "Araucanos" when they take on the "Cafeteros."

There you have it, boys and girls. The end is in the beginning and the next five days will decide the fate of many in the soccer world. From 200+ countries when this started 18 months ago to just 32 in next year's contest. Surely the biggest spectacle on Planet Earth.
Posted by R. Mera Velásquez at 11:38 PM