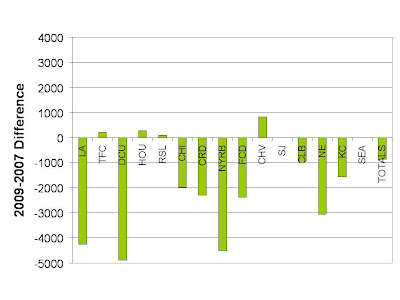 Back to club business. MLS has seen its share of ups and downs lately. From DCU's inability to win important wins at home, to an FC Dallas that suddenly has a last playoff berth in sight with the aid of the resurging Cunningham. In the stands, Chivas has lost its momentum while Salt Lake, Dallas, New England have seen important gains that bring them at least level with last year's numbers. With the closing of the season next week, it looks like some of the numbers we have will stand as they are.

A closer examination with the aid of the figure 2009-2007 we can see the pre-post Beckham effect. His influence felt late in 2007 and died down in 2009 after the AC Milan soap opera. This year, it's Seattle and Toronto that make the difference. Indeed, dropping Seattle and Toronto from the average places the average season attendance to 14411 from 15895. Plenty of things to consider before 2010 and Philadelphia's introduction. Will we see more of the same? Will Seattle's attendance tumble out of the honeymoon phase? Only time will tell. Again, all stats are derived from MLS official numbers and the graphics are in the right column of this page.
Posted by R. Mera Velásquez at 12:48 PM