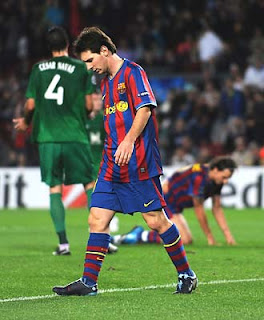 It's still early, yes. But could we be seeing a reversal in superclub fates? I watched most of the Barcelona - Rubin Kazan and Liverpool - Lyon games and I have to say it was entertaining to watch multimillion dollar players get frustrated against more modest (by European standards) teams. Until I read a couple of post-game stories, I thought both Rubin and Lyon had won at home... and rightfully so. But then, as I read the game recounts and other scores, I saw that the games had been at Anfield and Camp Nou. What?!

That's right. Not Ibrahimovic, Messi, Xavi, Iniesta, Marquez, Pique and company could tackle the Russian champs in their own house. Ibrahimovic's goal was pure magic but the icing on the cake never came and Barca are now in a bit of a predicament, if only for a while. Could both Inter and Barca be left out of the competition in the group stages? Don't count on it. Rubin Kazan will need to secure all home points and a tie vs Inter isn't helping much at this point. Inter, however, needs to start winning some games. 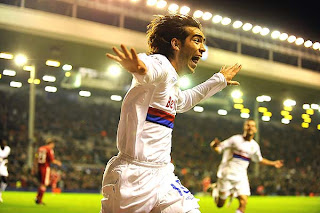 And what about Liverpool? The Anfield side has much more to worry about with Fiorentina also being in this group. Benayoun and Torres weren't big enough deterrents to keep the eternal-favorites French club, Olympique Lyonnais, from causing damage through Argentine Delgado late in the game. Yes, no Benzema included.

Could this be a backlash of modest teams versus superclubs and their super-expensive players (e.g. Real, Barca, Man U)? Too early to tell, but the possibilities and the ensuing matches are anything short of dramatic.
Posted by R. Mera Velásquez at 10:28 PM

Saw the Man U game today, they again pulled one out in the last minutes. I think Liverpool is much more likely to fail to advance. There play in the Premier League has been a bit lackluster as well - they will have to work hard to even get back into the Champions League next year at the rate they are going.