Ecuador vs Uruguay: Time's up 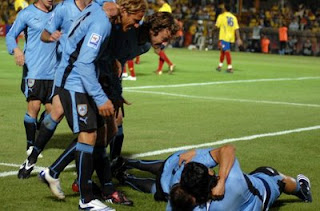 History is tough to swallow sometimes. Historically, Uruguay has always been better than Ecuador. Better leagues, better players, and better world cups. The "charruas" won two of the first four editions of the ecumenical tournament, and although they have been inconsistent this time around, a win in Quito was just what they needed.

It's saddening for a nation that has become accustomed to being a player on the big stage for the past 9 years. Maybe it's the wake-up call they need. Vizuete did a good job as coach but somehow I think a seasoned Argentine would make things more interesting for the Tricolores. Time will only tell. Now they have 2011 Copa America to look forward to, a tournament in which they have continuously failed ever since 1993. It's also sad for up-and-coming players like Chirstian Benitez and Joao Rojas, as well as for experienced world stars like Valencia, Mendez and Castillo.

So, take a bow, Ecuador. It's time to leave the number 5 spot to a better team... and today that team was Uruguay.
Posted by R. Mera Velásquez at 8:49 PM