The World is not enough: USA tops Concacaf 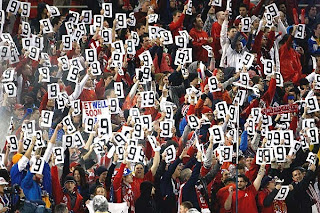 The USA cemented its place atop Concacaf today with a well-earned tie full of emotions that reverberated all the way to San Salvador. There, upon learning that Costa Rica had tied, Honduras was assured that their goal differential would mark the difference and that they would go on to qualify as 3rd in Concacaf.

Back home it was personal for Altidore, as seen with early scuffles in the game that earned him a yellow card. It was also personal for coach Bradley and his son. Bradley Sr wanted to finish at the top of the conference to have a better chance at being first-seeded in the World Cup group draw. Bradley Jr wanted to respond to critics of his game. He did so with a goal. The same goes for Bornstein, the much-maligned left back, who delivered a stellar performance that was capped with a C.Ronaldoesque surprise-header that sealed the tie in the final seconds. Mexico's tie with Trinidad & Tobago meant the US would remain first in the table. 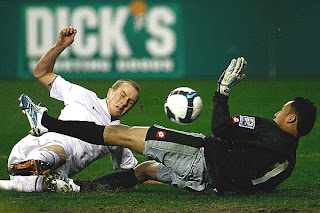 It is true that our players had Charlie Davies in mind today. So did an entire nation of fans and followers of the game throughout the world. Our national team players wanted to make him proud. The Americans never gave up. That is what separates this country from other footballing nations. It is our sheer will to continue fighting the game until the very end. Scanning through the Mexican soccer media I repeatedly came across these phrases: "Typical United States come back," "they are resilient," "a cohesive team like no other," "the concept of group is integral for success." Indeed, an important recognition of the American style of the game.

Losing Onyewu to an unfortunate injury in his left patella tendon (knee) will create important competition for the starting spot alongside Bocanegra. Marshall, Goodson and Conrad are great options, as are Califf and Parkhurst. These are all very technical, capable players. Still, a healthy Onyewu marks the difference in this team. Charlie Davies' absence will force Bradley to rethink the offense, one that was performing remarkably well with the speedy forward. Still, we must consider that Casey, Cooper, and Ching are great options with Altidore. And if that were not enough, we have both Donovan and Dempsey able to shift into striking roles. This is the depth of the US at this point in its history. This is why just getting to the World Cup is not enough. The US can penetrate deep into the tournament. They have the character and the players to do it.

How long is Onyewu out?