Undermanned: US in the U20 world cup 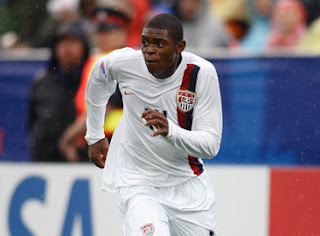 They are under 20 and are undermanned. The US U-20 national team has started its U-20 World Cup adventure in Egypt with a 0-3 loss to powerhouse Germany. Why the negativity? This time around there aren't the Freddy Adus, Jozy Altidores and Michael Bradleys. They have grown up and are playing their trade in Europe. Added to their absence is the fact that most of the players on this U-20 side are collegiate players and not really club-based.

Indeed, some of the US soccer media have stated repeatedly that this year's batch of players lacks consistence due to the collapse of the MLS reserve league. I have to say I agree. When you have guys like Brek Shea (of FC Dallas and who hasn't scored) leading your attack, then you might be in trouble, especially considering the firepower of nations like Germany and Cameroon. For an in-depth look at the U-20 roster, check out this story from the SBI crew.

I guess my biggest worry is the lack of credibility and a potential slump in our youngsters' play. Mikkel Diskerud, Dilly Duka, and Bryan Arguez are not household names yet. Today's match versus Germany showed the lack of cohesiveness at the back, even with standouts like Ike Opara. The team had its share of chances but was nowhere near as impressive as the U-20s were in Canada when Adu and Altidore connected on so many impressive plays--including a win versus Brazil (which included Pato in its squad).

It remains to be seen if collegiate players that are part of an alternative, sometimes alien type of soccer with its substitute rules and timeouts, can deliver on the pitch at a major tournament. Missing regular top level play as Altidore, Bradley and Adu were involved in during their stint in MLS's defunct reserve league will undoubtedly hurt the US's chances in Egypt. I think I'm more excited about the U-17 crew, but there are still two more games to play: Cameroon and Korea. And as we've learned from the Confederations Cup, you can never count out the United States.
Posted by R. Mera Velásquez at 2:18 PM

Where are your past articles???