US vs El Salvador: Lessons learned? 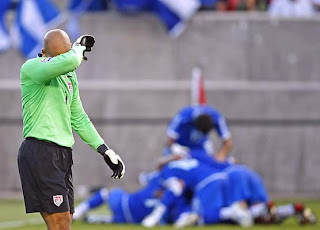 Wow. that was not supposed to happen. Or was it? El Salvador has not lost in the hex by a score greater than 1 goal. Today they showed up defensively but were given the upper hand in the attack with a faltering US defense. Yes, the US went down on the scoreboard at home (again) early in the first half. I want to stay that Onyewu's absence was felt today, but in truth it was much more than that. The Americans lost their composure, strength in the air, their players, and even their spirit at times.

It wasn't all bad, no. USA got the win and the three points they needed. Altidore and Dempsey showed why they play in the EPL. Davies was a nightmare for the Salvadoran defense and Spector showed why he should always be the starter at right back. Holden cemented his place as a national team regular and Torres finally got a second chance, and excelled.

The score should have been different, right? Yes. The referee corps for this game was atrocious. Flagrant handballs, sketchy calls for both teams and, most importantly, an Altidore goal that was unbelievably disallowed. Wow. And it was a beauty, too. Oh, and despite the Salvadoran goal, Howard proved why he's one of the top goalkeepers in the world. 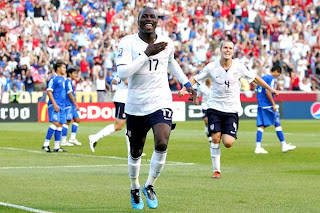 Then again, El Salvador could have tied or won this game. That's right. Bornstein was repeatedly overtaken by Castillo, Zelaya and company. His lousy mistouch led to to Castillo's goal. Marshall, Feilhaber and Bocanegra constantly lacked communication, which led to important attacks from the central americans. There were large voids in the midfield so often when El Salvador attacked that I no doubt sounded like a disgruntled commentator to my viewing party.

What's next? Another must win at Trinidad and Tobago. As I alluded to on my last post, Concacaf is way too tight right now to let any points slip away. Honduras is looking as strong as ever and Mexico is peaking now that it remembered that they are the top dog in the region. Their goleada over Costa Rica at the Saprissa stadium reiterated that. Right now, the US is in second place behind Honduras due to their ample goal differential (let's hope Jozy's goal doesn't hurt us when things are set and done next month). A home game versus Costa Rica and the final game at Honduras is not an easy schedule after the T&T game. Much soul searching remains. Let us hope the boys show up again in Port of Spain on Wednesday. Kudos to Davies and I hope his injury isn't serious.

Having seen the highlights it seems the goal they took away may have been a makeup call for the missed offsides on the first goal. Unless I misunderstand the rule off a direct kick, they had about four guys offsides when he struck the kick. And if I am wrong, why did El Salvador play what appeared to be an offsides trap there.

It's a trick play. El Salvador played the offsides, effectively negating 4 US players. The trick is that these players are meant to do this so that another player (Dempsey) runs in from behind, outside of the area, in an onside position. This was well done by the ref. Jozy's annulled goal was (1) not offsides by a long shot, Jozy was a step back from the defender. (2) Dempsey did not foul the guy as he made the pass, the defender simply tripped over him. (3) It may be that Jozy fouled the Salvadoran.

Thanks for the explanation!