Redemption: US vs Egypt 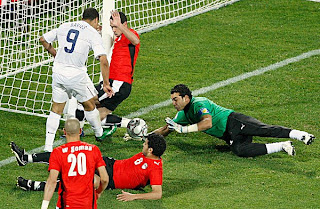 Nobody likes to play the numbers game. Usually when you play it it doesn't go your way and you are left saying, "well, we almost had it but..." Not today. The score was USA 3 - Egypt 0. Wait, wasn't this the same Egypt that beat Italy in the last game and that almost tied Brazil in the first game? Wasn't this the same USA that got humiliated in the second half by Italy and that got outclassed and out played by Brazil? Yes and no.

Yes, Egypt had an amazing game against Brazil putting their chances away and conceding a late goal to a Kaka penalty. Yes, they blanked Italy and the Azurri were stunned by the African champs 1-0. But not today. Injuries count, yes, but you have to keep your composure in international football or you will get burned.

And what about USA? They played a great game against Italy until Clark was sent off. They held their own until the spaces in midfield opened up for two sensational long range shots from the "Rossi" boys. Things may have been different with Clark on the pitch. Against Brazil the US came out muted and got burned with an early goal (same thing happened against Costa Rica and Honduras). Brazil went up by 2 goals by halftime and Kljestan took the US down to 10 men with another silly foul. Brazil 3 - USA 0. But not today. No red cards. No silly fouls. That made the biggest difference. That plus heart, desire, teamwork, and yes, a bit of luck. 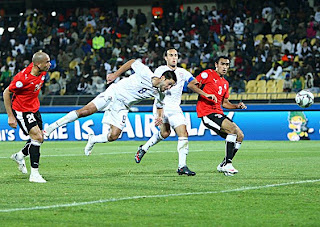 Redemption? Yes. Many out there have been calling for Bradley (the coach) to step down. Others say the US is just not that good. Many of us were somewhere in between. Hoping for the American spirit to shine through and show why the sport has evolved so much in our country. Today Jozy showed why he can cause problems for the other team, why Landon Donovan is an amazing player, why Michael Bradley belongs with the big boys, why Onyewu and Spector are constants in the back, why we have speedy forwards like Davies aching to show off, and why Dempsey is a world class player. He coughed up a lot of balls and was miscued in a lot of plays. But Bob Bradley was correct when he said that the reason he kept him a starter was because he alone has moments of brilliance that no one else can bring. And wow, that was such a moment of brilliance. It's up there with Pele's header in 1970 against Italy and Romario's versus Sweden in 1994. Yes, I know those are two amazing players but consider this.... The situation was important, the result was extraordinary, and the finish impeccable.

And in the end Italy lost to Brazil by the same score, 3-0. That was the magic number the US needed and that's what they got. Up next is Spain, and if you're gonna go down you, you should do it against the best. That's why we have dreams, no?

Or we could not go down at all - that would be way cooler.

Yes, it's gonna be an awesome game... Too bad I have to be at a conference that afternoon :(