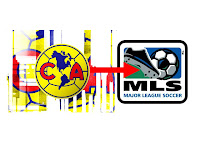 As I posted on the MLS Rumors website, XM Satellite Radio's XM Deportivo Deportes De Primera radio show reported that Club America de Mexico is looking to "reach out" to its considerable following in the United States and also look for partnerships with MLS. Michael Bauer, recently elected president of said institution, discusses among other things, participation of America in MLS.
As to whether this is an exploratory partnership a-la-Bundesliga or a rebranding of one of the MLS teams or acquiring a new team remains to be seen.
From some of the comments posted following the story there are two clear sides to the coin: Chivas USA didn't work and this is an American league, and the other, potential rivalries could spark up with Chivas or other teams and an additional border state team could take shape. I might even venture to say FC Dallas could change names (their attendance is meager at best right now). Further, maybe Chicago--as suggested by soccer365.com some time back--could also rebrand and have an excuse to cling on to Blanco for another season (his contract expires at the end of 2008). [Also note that Chivas USA is among a few teams that have seen increases in attendance this year... just look at the 07-08 difference plot.]
Although I tend to side with some of the fans and bloggers out there that this should be an American league, there is nothing wrong with having teams be named after teams abroad. It actually happens to be common practice in Latin America and, and nobody seemed too concerned about this, teams such as FC Barcelona and Boca Juniors have expressed interest in starting up an MLS franchise with their name on it.
We must also be objective and realize that there is a large Hispanic (mainly Mexican) population in the States and that these are soccer-addicted individuals. I also see nothing wrong with repatriating players such as Orozco to play for the red, white and blue. Maybe more transfers will take place between the MLS and the Mexican Leauge. This would be a great deal for the MLS, accruing increasingly more experience against foreign teams that may get the league play in tournaments outside the SuperLiga and Concachampions. . . but that is another thread.
Posted by R. Mera Velásquez at 8:28 PM

Could you tell an ignoramus more about the history of Chivas. They seemed to be a Mexican team playing within the USA. I am far off and, whatever the hell they are, how did they come into being?

Chivas USA was founded in 2004 and is owned by Mexican investor Mogul Jorge Vergara. He owns Club Deportivo Chivas Guadalajara. That team happens to be one of the top legendary Mexican soccer teams, sort of like the Red Sox or the Steelers. Vergara also is behind getting former England coach Sven-Goran Erikson to the Mexican national team. I believe he owns or at one point attempted to own a Spanish Primera team too. Chivas USA came about to draw on the considerable amount of Mexicans in southern California. Initially the team had mostly B-rated Mexican players but this backfired due to horrible form. Another selling point was to have a derby in MLS--against the Galaxy in the denominated SuperClasico. Now coached by former US international Preki, the team has had a couple of good seasons. They are in the SuperLiga (a ridiculous tournament formed only to make money and with no real weight in world football, to me at least) and also in the newly formed Concacaf Champions League.
Chivas USA has some good players: former international Ante Razov (34), GK Brad Guzan (probably going to England this summer), Jonathan Bornstein (could be a really good player if he returns to form) and finally Sacha Kljestan. Kljestan is a personal fave of mine. He's reallly good with the ball and has featured in the full international team as well as the u-23 Olympic side. He should be in the Olympics this summer.

I don't mind brands from other countries entering MLS, but what I think is damaging Chivas USA is the lack of a connection to a local community. Why should a local Los Angeles fan follow a team that implies no connection to Los Angeles?

I think if they changed their name to Club Deportivo Los Angeles (CDLA) and called themselves Chivas LA, they can then start building their own traditions and connect to the local community.

I truly do not understand the need to call the team "Chivas USA"... it sounds cartoonish. I would be inclined to pull for someone other than the Galaxy in LA. I could see Chivas being like the Clippers in the NBA (i.e. the working class alternative to the Lakers), but not with that silly name!

I agree that the name is cartoonish. I've seen a lot of people out there suggesting Club Deportivo Los Angeles. Also agree with connecting with the community. Maybe a move to San Diego wouldn't be a bad idea either.