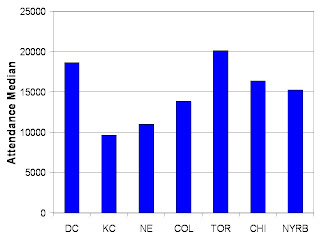 The Becks parade continues to rage on in the Eastern conference, bringing numbers much higher than in the beginning of the season. Although the New York-LA game may not have been as high in attendance as it was last year, it was large enough to bring NYRB's season average above that of last year's (see the 07-08 plot difference). Because I know a lot of you out there in bigsoccerland like to see other aspects of statistics, I'm including median plots for the east and the west in high definition (just click for full page). Note that NY's median is still higher than 15,000 even though they had two games below 10,000 this season. Their relative attendance currently sits at 69%, much better than NE, RSL, CHV, DAL. 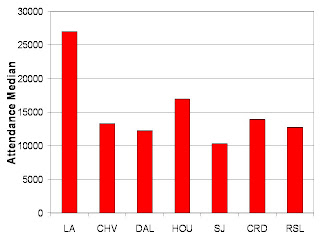 New England's meager attendance shows its ugly face in the median analysis (KC not included do to a smaller stadium). Even so, NE's attendance is not much differend than it was a year ago for the entire season (see difference plot). I've also read that KC's game with LA will be held at Arrowhead. This should put another inflationary figure into the Eastern conference and effectively raise KC's average to make it look more like San Jose's out west (>120% relative attendance). Therein lies the Achilles heel of relative analysis and this has prompted me to come up with a relative median that I will introduce in the coming weeks. Such a number will, hopefully, do away with the inflationary effects of switching venues. This isn't the same problem with DC, NE or NY since their inherent MLS capacity is already twice that of SJ and KC.
Just wanted to remind everyone and to alert new visitors to the site: all numbers are based on official public MLS numbers and all plots are on the right column.
Posted by R. Mera Velásquez at 11:48 PM

thanks for doing all of this. interesting reading.