Out of the Euro hangover we come to mid-season shake-ups with trades galore from the potential Conde-Ruiz-McBride megadeal to modest acquisitions by the Red Bulls with Rojas, etc. Attendance has finally shown the Beckham effect for the past couple of weeks, if maybe not the immediate ones. Becks has begun his eastern conference tour and numbers for a lot of those teams should be coming up. Don't be too discouraged by the 07-08 difference. Remember that it's the 2007 season total average. On that note, I just recently read that the mean attendance for Fluminense of Brazil is actually around 17,000. Tomorrow's game versus Liga for the Libertadores should attract 90,000+. But isn't it interesting that a brazilian team would have this kind of mean turnout? Actually, it makes sense. People are too poor in latin america to go to every game a-la-EPL. Even some EPL games aren't completely sold out. As always I suggest a certain degree of caution when looking at these numbers. Below is a nice close-up of what the designated players (5 of them, minus Donovan and Reyna) are doing. Note that I will, for the time being, not put american players under this classification to provide a clearer picture. I've highlighted the two spikes (Blanco and Becks) during their visits to San Jose at McAfee. Becks usually hovers around the 100% mark, save for a couple of home games most considered boring. Blanco attracts crowd but it depends on the demographic. Gallardo benefits from the DC crowds and Lopez from the intimacy of the CAB. Angel has dismal numbers from a fickle New York crowd. Also, note that the "stars" may not have played on some of those games. 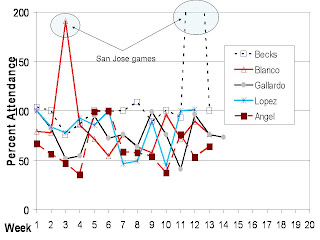