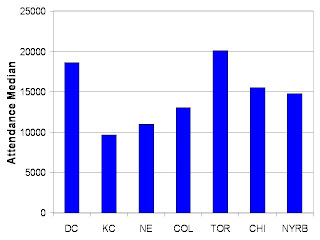 Since a lot of attendance analysis out in MLS soccerland is looking into other meaningful statistics like median, I thought I would follow along and create some new plots. These plots will not be regulars like the ones on the right column but instead I'll post them from time to time to show interesting trends. I think they speak for themselves by showing the markedly low attendance in places like New England, Kansas City and San Jose. This analysis also takes away the inflationary effects of overattendance due to Beckham and/or scheduled international doubleheaders. The analysis also makes Houston look better than its relative attendance suggests. I still wonder if the 32,000 capacity at Robertson Stadium is also the MLS capacity but I've had no word on a different number. Also note that LA's numbers show just how many times they have sold out the stadium since the median is 27,000. Another surprising number is New York's. Even though they've had two games under 10K, it still doesn't mean attendance has been that bad overall.
These plots are only valid through week 16. Full week 16 numbers and plots will be posted tomorrow. 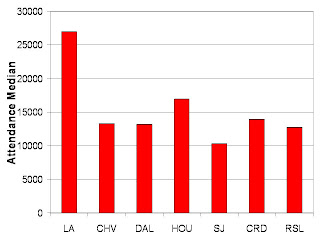 Thank you. I'll make that correction just because it does credit to Houston crowds